Acoustic guitars don’t have the same sustain qualities as their electric counterparts because of the instrument’s design.

Whether you pick or use your fingers to strum, string thickness and the strength of the musician’s attack play a direct role in creating note length.

When you don’t strike a note or chord consistently, the sustain creates a muddied effect on the tones played.

Although acoustic sustain isn’t as critical for a composition because most guitarists use this instrument for rhythmic elements, there are some ways you can increase the note length and quality for those moments when you want a specific part of a composition to stand out to the listener.

How to Get More Sustain on an Acoustic Guitar

Acoustic guitars generate more sustain when using a thicker string gauge with a more potent attack. Musicians must use chords or notes in the lower register to generate the most vibrations while avoiding finger placement or movement while continuing with the piece’s rhythm.

If you’re trying to get an acoustic guitar to deliver more sustain or increase the natural tones of each note or chord, here are the questions I often get during music lessons or while working with our local amateur singing group.

How Do I Increase Acoustic Sustain?

Depending on the musician’s experience and the guitar quality they’ve invested in for their music, I typically give people one of the three following tips to increase their acoustic sustain.

The problem with the final bit of advice is that new guitar players find it painful to press into thick strings. Until the calluses build up on your fingertips, heavy sustain can cause bleeding.

Since no one wants that experience (and getting blood out of the fingerboard is a pain), the first two options are what I typically advise.

Yes – heavier guitars create more sustain. That’s why a Les Paul can play for days while a Strat seems to fade in the wind.

That’s a truth that applies to electric guitars almost exclusively.

Acoustic guitars are rarely made from a solid body design. Even when you purchase an electric-acoustic, you need the hollowness to create resonation, especially for the lower notes that the strings produce.

If you can find a solid body acoustic, you can get a little extra sustain. For me, adding more weight to the instrument isn’t enough of a trade-off when you can play a note for two or three seconds longer.

I’d recommend investing in an electric acoustic with a carbon fiber body to maximize your sustain. 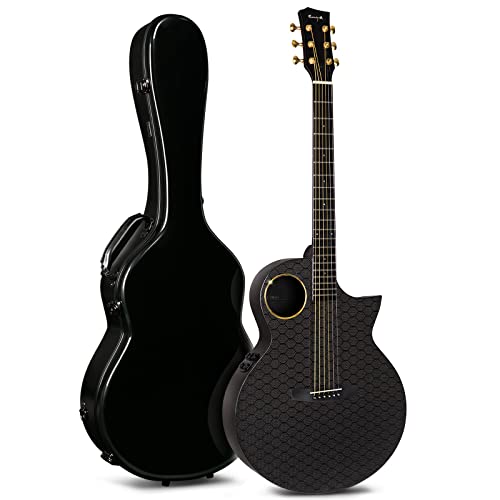 Enya Acoustic Electric Guitar X4 Pro Get it on Amazon

The Enya X4 Pro delivers this result while providing a comfortable, elevated neck that releases pressure from the 14th fret on up.

It delivers a massive force on the lower end while providing a stable platform to play in different environments.

You won’t need to worry about temperature or humidity when playing that guitar.

David Gilmour is the best in the world at achieving more sustain from a guitar. His tone is iconic, and it’s not easy to replicate.

He uses fuzz pedals to create his signature sound. That alteration creates more sustain, even when compared to distortion alternatives.

Gilmour also uses modulation, reverb, delay, and compression to increase the attack of each note and chord.

With hundreds of different pedals and each musician’s playing style dictating the one to choose, it’s difficult to offer a generic recommendation. 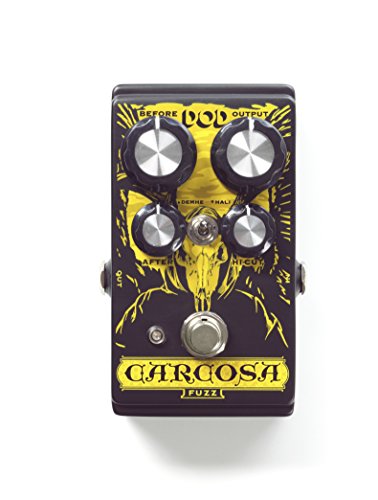 Carcosa Acoustic Guitar Effect Pedal Get it on Amazon

If I had to choose one, it would be the Carcosa Acoustic Guitar Effect Pedal. It uses fuzz as its primary feature, but you’ll get lots of bias control to ensure you get fat notes or desiccated chords based on what you want to do.

The pedal delivers more treble character and an exaggerated mid-range to help your playing stand out in a crowded mix. It provides a true bypass and tons of output that you control to ensure each song sounds true to the artist.

How Much Action Does an Acoustic Guitar Generate?

Most acoustic guitars should have an action height of approximately two inches at the 12th fret.

Some instruments have a little more, while others have a bit less.

The primary issue to review here isn’t the action, but how you’re impacting the strings. You’ll get more sustain by playing directly over the sound hole instead of above or below it.

That result happens because you’re sending the vibrational energy right into the instrument’s body to let it resonate.

If you strum too high or too low, you won’t have as much “juice” to send through the guitar for the listener to eventually enjoy.

What If My Guitar Has Too Much Action?

Acoustic guitars can end up having a lot of action with rhythmic strumming. In that kind of playing style, you don’t want tons of sustain because it’ll change the way the listener perceives the beat.

Think about it like this. If you pluck a note, you want it to stay consistent while tapping out the rest of the sequence, measure, or bar. The only time it should fade is when you’re close to hitting that note again.

When there is too much sustain, you won’t get that natural fade.

With rhythmic strumming, you need enough sustain to fill the void between each attack. You want a little fade in there as well to transition the listener to the next sequence.

If the only thing your playing delivers is the same sound each time, it becomes a boring experience.

You’ll notice more action in the neck if your guitar has too much sustain. The easiest way to reduce this issue is to limit your attack. You can also swap out your current acoustic strings for a thinner gauge. 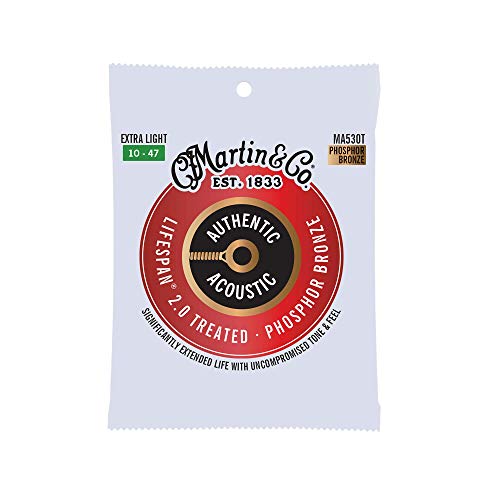 Most acoustic guitars come with 12-gauge strings. Dropping to 11s will reduce sustain and make playing easier at the cost of your overall tone. I like to use the Martin Guitar Lifespan® 2.0 phosphor bronze strings to achieve more control without drastically changing how my instrument sounds.

Do You Have Any Acoustic Guitar Setup Advice?

The primary advice I give people who want more sustain from an acoustic guitar is to invest in an effect pedal. If you play a classic design, be sure to strum or pluck the strings where you can maximize vibrational energy.

As guitars get older, they need a little maintenance to improve or restore their sustain abilities. You can replace the frets, upgrade the nut, and adjust the tremors or bridge.

It’s not always easy to tell where the repair or replacement work needs to occur. I have someone strum the guitar for me so that I can observe where vibrational falloff occurs with the strings. If it’s near the bottom, I’ll focus on the support elements there.

When it happens at the top, the same principle applies.

I’ve also found that some musicians don’t clean their acoustic guitars as often as they should. When dust and skin oils build up on the instrument, the result is a direct impact on the sustain it produces.

Here are the steps I recommend for cleaning.

Store Your Guitar in an Appropriate Place

Acoustic guitar sustain is directly affected by the moisture and humidity, or lack of it, in a storage or playing environment. Wood naturally expands and contracts, which means the tonal quality of an instrument varies based on those conditions. Keeping it at room temperature and 30% humidity is the best option.

Guitar sustain for acoustic players is something you can fix relatively easily. If you’re playing on a stage, just mic the instrument and have the person at the soundboard make the adjustments you want.

When playing in a band, consider investing in some pedals that reflect the style and passion you have for music. You’ll notice significant improvements to your sustain with a suitable setup.

You can even adjust your playing style, allowing the lower strings to sound longer while playing in the upper register with the thinner ones.

In most circumstances, I’ve found that a musician’s worries about their sustain are unfounded. Cleaning the guitar tends to fix the problem when there is an issue. After doing that, implement the other ideas found here to reach your goals.