If you have ever picked up a Les Paul, you know what it is like to play a heavy guitar. My first model, when I could finally afford one, weighed 13 pounds.

Other guitars have a similar look, but they might only weigh seven or eight pounds.

How does the construction of a guitar affect its tone quality, note production, and sustain? It all has to do with the wood type used, what kind of body it has, and the quality of the strings you’re playing.

Here’s what you need to know about guitar weight and sustain.

Do Heavier Guitars Have More Sustain?

A heavy guitar typically has more sustain and resonance than lighter designs. Most instruments with weight have a solid-body configuration that prevents vibrational absorption. That means the strings continue ringing after the initial attack because less energy is lost from the note or chord.

Four primary components are responsible for the weight of an electric guitar.

Although heavier guitars typically have more sustained than lighter ones, the actual wood used determines each attack’s tone quality and length. The best guitars that can play forever are usually made of mahogany.

Another excellent option for long sustain from a guitar is maple.

Here is a comparison of the common wood types used for guitars and the average weight in pounds per cubic feet means for sustain qualities.

It’s important to note here that the guitar must be made of a solid wood to achieve the sustain qualities.

Suppose you have a basswood instrument with a mahogany veneer. In that case, it will fall into the average weight category of the former, not the latter.

When you compare the weight ratings of the different wood types, you’ll see that mahogany has about 1.5 times the sustain support as basswood.

That’s why you often see a Les Paul guitar sending notes and chords longer than an entry-level Gibson, even if the hardware components are relatively similar.

Although the neck impacts weight, the note resonation isn’t as affected by the upper strings.

The primary issue is whether the frets interfere with vibrational movement. That issue could be potentially solved if they do by shaving them down a little.

When a guitar is made from a thick slab of wood, it’s more likely to support a lengthy sustain compared to a lighter, smaller size.

That’s why there is a significant difference between the Les Paul and the Stratocaster.

When you pick up the typical Les Paul, you’re grabbing a guitar made from a thick slab of mahogany.

Although a Strat might be made from the same type, it’s a smaller and thinner piece that forms the instrument.

That’s not to say that a lighter guitar won’t produce a lengthy sustain. There are some exceptions to this rule.

Although it is not as common to see ironwood turned into a guitar, several species are available to provide a dense body.

The best option is black ironwood, which has an average weight of 88 pounds per cubic foot. That means it can give you up to twice the sustain of a Les Paul mahogany model.

African blackwood provides 61 pounds per cubic foot, which is sturdier than maple. This option is sometimes referred to as the “original ebony” for guitars.

It is another unique option that delivers plenty of sustain, even when put together in a lightweight design. It has an average weight of 61 pounds per cubic foot.

Here are some other wood types you’ll sometimes see when shopping for a great guitar with a long sustain.

Although they’re not as common, they can be competitive with what you typically see in the marketplace.

My favorite tonewood for a guitar with excellent sustain is Japanese Ash (Sen). Although it shares its name with other ash trees, it’s not technically related.

You’ll notice less brightness with this option, but the sustain is equal to those old Les Pauls when the build is right. It offers an open grain for a clean look while offering a massive presence you can’t ignore.

What Happens If the Guitar Body Uses Multiple Woods?

Guitar manufacturers recognize that the average musician might not have the funds right now to purchase a solid mahogany instrument.

When rare or expensive wood types are used for mass-produced guitars, it’s not unusual to see a combination of different species used in the construction method.

Spruce is a common addition to the top, back, or bracing of a guitar. Since it has an average weight in pounds per cubic foot between 25 to 44, it fits right in with the lightweight options while delivering extra brightness.

When shopping for guitars that use combination techniques, you’ll want to match densities whenever possible.

It might look great to have an instrument with an aspen top and a mahogany back, but the density imbalance could lead to unfavorable notes, tones, and sustain.

You can find a few guitar manufacturers using products other than wood to create a guitar body. Some of the most popular options incorporate carbon fiber, while others use aluminum.

Danelectro makes a unique guitar with a combination of popular and Masonite.

Here is a closer look at the various tonewoods you’ll find and why they’re desirable as a musician. Since opinions can vary, don’t think of this as a ranked list.

Although there are 49 types of mahogany, the trees are practically extinct because of how popular the material is for musical instruments and furniture.

You’ll notice a distinctive difference in the guitars built in the 1940s and 50s compared to today because of the density changes.

You can expect a warm timbre with plenty of bass when using this tonewood. The sustain is one of the best you’ll find.

Newer Les Pauls use a combination of mahogany for the body and maple for the top to create a lovely balance.

The necks are traditionally made from this dense wood, ensuring there is enough strength for long-term playing.

It’s not just its tonal qualities that make maple an appealing choice for guitars. It is also the grain that you see (think flame or quilted maple).

You’ll notice brighter sounds with less murkiness or muddiness with this approach.

Alder was a popular choice in the 1950s and 60s. Many of the guitars that Fender made during that area were constructed of this tonewood.

The cost is a little higher than lightweight density species today, so it has fallen out of favor in the entry-level market.

You’ll notice warmer sounds coming from an alder instrument with above-average sustain. It tends to have less in the bass and midrange frequencies than other instruments, which works well for shredders or those that carry the melody.

The Fender Vintera Road Worn ‘50s Strat uses a maple fingerboard and top with an alder body to create a signature sound. It plays fast, bends well, and lets you show off your talents in any setting.

This tonewood option comes from the Linden tree. It tends to be softer than most tonewoods and has more availability.

You’ll want to be careful with an instrument made from this wood type because it tends to dent easily.

The other issue with basswood that affects some musicians is the tonewood’s lack of color or grain.

Some manufacturers place a veneer on top of it to create something that feels visually appealing.

You’ll want to pay attention to an instrument’s description to avoid that construction method if you think it is bothersome.

Squier by Fender Bullet Stratocaster Electric Guitar Get it on Amazon

The Squier Bullet Stratocaster is an excellent beginner’s option that hits the right amount of sustain for those early lessons.

It uses standard single-coil pickups to replicate the vintage Fender sound while sticking to a student-friendly range.

The comfortable C-neck delivers an authentic feel that stays comfortable for virtually any playing style.

Although this tonewood is relatively soft compared to others, the weight density is similar to alder.

You’ll find a guitar made with this option to be lightweight with decent sustain, although it isn’t going to impress an overly critical audience.

What stands out about poplar as a tonewood is its malleability. When you start working with this material, you can turn it into almost any shape and use your preferred finishing technique without changing its qualities.

Epiphone Les Paul Special VE (Ebony) Get it on Amazon

The Epiphone Les Paul Special VE is an excellent entry-level guitar that provides a unique vibe and fantastic aesthetics.

It uses open-coil humbuckers to create a beautiful growl, while the slim, tapered Okoume neck allows you to play with speed.

It’s a great instrument for learning or providing everyday instruction. I also use it for the occasional gig when I don’t want to risk traveling with my other guitars.

What Can I Do to Achieve Consistent Sustain?

Better sustain comes from strings that can vibrate longer or hardware that optimizes how those vibrations are detected. A heavier guitar delivers results because it absorbs less energy when playing. Choosing the right balance between weight and tone ensures each musician has a high-performance instrument.

My favorite way to achieve more sustain while playing an electric guitar is to use delay pedal manipulation.

The best pedals offer an infinite decay setting that makes it so that my notes and chords never disappear unless I want them to go away.

My most recent notes are always louder than the previous ones, which means your playing doesn’t turn into a jumbled mess.

Although this option causes everything to be sustained, you can still control the sounds when using a single key center. 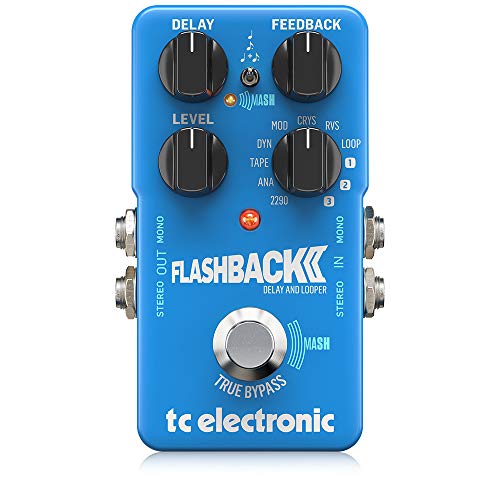 TC Electronic Guitar Delay Pedal Get it on Amazon

It’s a lot of fun to experiment with what you can do when the TC Electronic Flashback Delay and Looper pedal is part of your series.

Sustain has a time and a place in many compositions, even if you’re just at home, jamming with your friends. If you want more of it, consider investing in a heavier guitar.