In the early 1950s, Fender used a one-piece fingerboard and maple neck with a skunk stripe except for a few Esquire guitars.

The reason why those few instruments didn’t contain this element was due to a lack of having a truss rod.

Fender updated their guitar design in 1959 because the truss rod channels got routed into the neck’s front instead of the back. They created a seamless look by using a glued-on fingerboard.

When Fender introduced their bullet truss rod system for the Stratocaster in 1971, the routing returned – and so did the skunk stripe.

By 1980, almost all instruments received this design element regardless of whether they needed it.

What’s a Skunk Stripe on Fender Guitars and What Does It Do?

The skunk stripe on the back of a Fender guitar is a thin strip of walnut that fills the truss rod’s channel. Since the instrument is usually constructed with lighter maple, the darkness of the inlay stands out significantly. It’s a design element that dates to the 1950s.

When you purchase a Fender guitar today, you’re almost guaranteed to see the skunk stripe on the instrument.

Although you might find some contrast variations based on the body’s color, you’ll still get the unique design that attracts players to this manufacturer.

American Vintage models. You can also see it missing on the American Special, American Deluxe, and the classic player when it includes vintage features.

Its purpose is relatively straightforward. By filling the channel, Fender creates a safer, more comfortable playing experience for the guitarist.

There are any sharp pieces or access to the truss rod that could damage the instrument.

If you don’t want the skunk stripe, you can find 1960s models and modern replications that use the two-piece design without the inlay.

Anything that says “traditional,” “classic,” or “original” in its name with elements from 1959 to 1971 will remove the dark stripe.

When you’d rather get a Fender guitar to play, anything built since 1972 provides this unique design element.

A Brief History of Fender Guitars

Fender got its start as a radio service in Fullerton, California. The company was founded in 1938 by Leo Fender, who was a qualified electronics technician at the time.

Since Fender could repair everything from a phonograph to a public address system, you would eventually find electric guitars coming his way with their amplifiers.

By the 1940s, he recognized that his knowledge could produce something better, leading to the partnership with Doc Kauffmann to start making and marketing electrical instruments.

The first guitar Fender made in this partnership was a Hawaiian lap steel instrument. It did so well that he decided to abandon the idea of repairing electronics to focus on making instruments.

Kauffman disagreed with Fender’s assessment, leading the two men to part ways in 1946. That’s when the Fender Electrical Instrument Company came into existence.

Fender would keep his repair shop open in Fullerton until 1951, but he stopped working on it in 1947.

Noel Boggs is believed to be the first musician to play a Fender guitar. He had a lap steel instrument made in 1946 that features the first version of the cursive “F” that represents the brand.

After trying to get around that issue for some time, he’d eventually settle on the insertion of a metal truss rod in the guitar neck to help it hold its shape.

After seeing that this design tweak could create a viable instrument, Fender started mass-producing his first Telecaster guitars in 1950.

By covering the truss rod with a walnut inlay, Fender could produce his trademark sound, provide the instrument with added stability, and deliver the consistent playing experience that guitarists needed.

Fender would eventually sell his company to CBS for $13 million in 1965. It’s a notable sale because the broadcaster had only paid $11 million for the New York Yankees the year before.

Best Fender Guitars with a Skunk Stripe to Play Today

If you like the idea of playing a Fender guitar with a skunk stripe, here are the best instruments currently available for purchase.

Fender Player Stratocaster Electric Guitar Get it on Amazon

Fender uses an alder body with this Strat to work with a glossy finish that creates a lovely sunburst pattern.

It uses a maple neck and the classic walnut stripe to deliver the manufacturer’s sought-after look.

A humbucking bridge pickup and two single-coil neck and middle ones let you create that gritty, grinding sound that these instruments produce with ease.

You’ll appreciate the modern-C shape to the neck profile on the Fender Player Stratocaster Electric Guitar.

If you loved play Rock Band back in the day, this guitar has the same look and feel with the added weight of being a real instrument.

You’ll get a two-point tremolo bridge with bent-steel saddles to complete the traditional experience.

Fender Player Stratocaster Electric Guitar Get it on Amazon

If you like the skunk stripe idea from Fender and want it to stand out even more with your playing style, this electric guitar is the one you want.

It features buttercream coloring on an alder body to create a beautiful contrast with the dark walnut.

You’ll get a 9.5-inch radius fingerboard with the updated C-shape and single-line tuner setup for a lightweight and pleasant playing experience.

When you select the Fender Player Stratocaster Buttercream Guitar, you’ll find the design works with almost any playing style.

They’ve added a 22nd fret to let players express themselves through music in whatever way they prefer.

This product isn’t a starter guitar, but it will take your skills to the next level with consistent practice.

Fender Deluxe Nashville Telecaster Electric Guitar Get it on Amazon

You’ll notice the depth and warmth of your tone change immediately when you pick up this guitar.

Fender created it in Daphne blue to stand out on the stage, especially with the beautiful walnut inlay strip along the back.

It comes with two noiseless Tele pickups and a single strat to deliver a vintage sound with every chord and note.

If you select the Fender Deluxe Nashville Telecaster Electric Guitar, you’ll get the five-way switching option from the Strat-o-Tone® technology for extra tonal choices.

It delivers superior intonation from the bridge while offering the sustain you’d expect from a world-class instrument.

When you want to bend notes or add vibrato into a specific area in a composition, you’ll appreciate how the 12-inch fingerboard prevents you from fretting out.

Squier by Fender 70's Jaguar Electric Guitar Get it on Amazon

If you want to get away from the modern-C shape for your next electric guitar, this option delivers an exciting style. The body is made of poplar, while the fretboard is constructed from laurel.

When you select the Squier 70’s Jaguar Electric Guitar, you’ll find the alnico pickups deliver an excellent result for your playing. It uses nickel-plated hardware and vintage tinting to ensure you get the right look on stage.

Although it doesn’t use the Fender name alone, this option is a budget-friendly way to try the skunk stripe to see if you like it. 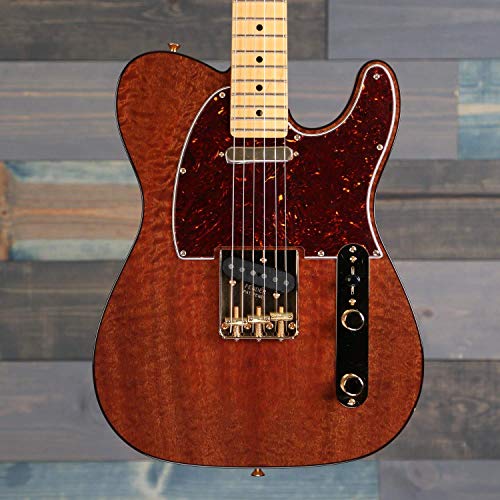 Fender Rarities Top Telecaster Electric Guitar Get it on Amazon

When your guitar needs to be as distinctive as your playing style, you’ll want this guitar hanging around your neck.

Unlike most 1960s replicas, you’ll get the skunk stripe on this model, along with the vintage body patterning and stunning front coloration that makes this instrument an instant classic.

It’s made from swamp ash and maple to deliver an impressive tone and quality.

Although several Rarities collection styles are available, the Red Mahogany Top Telecaster is the best option.

It uses the updated 22-fret design instead of relying on 21, keeps the Deep-C shape, and includes the hardshell case you’ll want to protect this investment.

With dozens of different brands available in today’s marketplace, you might find another manufacturer’s designs to be tempting offers when compared to Fender.

That’s why you’ll want to carefully review the advantages and disadvantages of playing a Fender guitar. It is an excellent instrument, but it isn’t always the best one for some players.

When you select a Fender Tele or Strat, you’re choosing a fantastic instrument. There isn’t a better way to enjoy music as a guitarist for those who appreciate its sound and feel.

As a bonus benefit, the popularity of Stratocasters today makes it relatively easy to secure any spare or replacement parts you need for the guitar.

If you want to change the hardware or look, you can order supplies online, at local repair shops, or at your preferred instrument retailer.

Although you can plug a skunk stripe guitar into almost any amp, the best option is to stick with the Fender brand.

I highly recommend using the Fender ’65 Super Reverb amp. It offers 45 watts of playing goodness while delivering a fantastic recreation of the Blackface™ Super Reverb® sounds from the early 1960s.

If you’re on a Tele, you’ll get that vintage vibe from the first strum thanks to the dual 6L6 Groove Tubes used for its output.

The Fender ’65 also comes with four Jensen® speakers with Alnico magnets to ensure you get a warm, rich sound that fills up the room.

It even comes with the tilt-back legs that let your guitar sounds echo off the ceiling for added contrast and brilliance.

Although this amp isn’t for beginners, you’ll find this investment will make all of your other instruments sound better.

If you are still learning how to play, I’d recommend the Fender Super Champ X2 instead. Although it only delivers 15 watts, you’ll get a feeling for what your guitar can do and if music is a career you want to follow.

How Much Do You Love Fender Guitars?

Fender is one of today’s top guitar brands after 70+ years for one reason: they produce high-quality instruments at fair, competitive prices.

If you want to stick to a tight budget, the Squier by Fender brand is an excellent choice.

You’ll get an excellent sound while making a few compromises on the materials to create something that’s reasonably affordable.

When you’re ready to take your playing to the next level, the Tele or Strat model you prefer will deliver impressive results!

You can expand on those outcomes by pairing your Fender guitar with its companion amp.

Although I’ve played several instruments from different manufacturers over the years, I always return to Fender products. They aren’t always the cheapest, but I’ve found them to be the best!

If you’ve played a Fender guitar before, what model was your favorite instrument?