Music encourages creativity, imagination, and composition. When a simple groove seems too repetitive, it might be necessary to spice things up by creating places for dead notes.

The most common place to hear a dead note is within a bass line, although a composer can incorporate this element into their music for any instrument.

You’ll typically see this inclusion when modal or chromatic notes don’t seem to get things quite right on the bass line.

It boosts the song’s groove without getting into clashing trouble with what the melody attempts to accomplish.

Dead notes, also called “ghost” or “false” notes, are muted to the point where no discernible pitch is available. Musicians play them on the guitar by using fret-hand muting techniques. This composition addition is often used to create texture and rhythm to a song while other instruments play.

A dead note is one that’s heard as a thudding sound on electric guitars, electric bass guitars, acoustics, and classical guitars.

The strings deliver some texture and sound from the strumming action when the note plays, but they are devoid of the pitch.

If you see a composition referring to a dead, ghost, or false note, all three indicators mean to perform it in the same way.

Drummers use dead notes in a slightly different way. The music indicates a place where softer sounds are necessary after the accented beats.

You can tell when a dead note is in a composition because the sheet music will notate an “X” symbol where a standard note would be.

Any note length can become a dead note, including whole, half, quarter, eighth, and sixteenths.

A standard contemporary technique for using dead notes is to incorporate them in different phrasing.

■ How to Play Dead Notes Correctly

Bassists who need to play a dead note must rest two or more fingers from their left hand on a string (or right hand on a left-handed instrument). You don’t want to press the string into the fingerboard because more intonation will occur if that happens.

Strike the string with the index or middle finger from the opposite hand. This action should result in an unpitched thud. You’ll know when to play them because of the X indication instead of the circular note in the music.

Dead notes are typically seen in solos with pull-offs, slides, and hammer-ons when they’re included with an electric guitar.

It’s a valuable skill to develop because the technique dresses up simple lines and melodies with a few rhythmic effects.

An unamped acoustic guitar rarely sees dead notes in its solo because the string wouldn’t produce enough vibration in the instrument’s body to create a meaningful result.

When you see dead notes in your music, you’ll want to play them as written to create the intended vibe of the composition.

Many beginners find that they produce dead notes accidentally while trying to play individual strums or chords. It’s a common complaint to hear that the strings have muffled sounds instead of something with tone or clarity.

In this situation, the finger position is typically the culprit for muted sounds. When you first start playing the Gmaj and Cmaj chords, it is challenging because the index finger always seems to graze the string below it.

That straying finger always creates a muted sound. The only way to improve it is to improve your hand positioning.

You can correct the issue by paying more attention to your fretting hand’s thumb to ensure enough clearance is available for the strings.

Here are the three steps to follow so that you can correct the problem with a bit of extra practice.

Many beginners start learning the guitar by having the thumb on the fretting hand rest on top of the fretboard.

That position changes the entire function of that hand. It causes the palm to sit underneath the neck, decreasing the player’s overall ability to move and stretch.

Since you need to reach for the fifth and sixth strings in that position, the fingers flatten across the strings.

As you get better with your technique, you’ll find that your thumb can rotate around the neck to handle the sixth string in some locations.

Some guitarists grip the neck to flatten the fingers for other purposes, but it makes the learning process more challenging. It’s often best to avoid that technique at first.

2. Get the Fingers into the Correct Position.

The biggest mistake that new guitarists make is to grip the neck with their thumb instead of pressing into it.

You want the thumb to rest right at the center of the neck’s underside. This positioning enables the hand to let the fingers curl and approach the strings from a right angle.

That means your fingertips will hit without accidentally touching the other strings.

Taking the time to get used to this process will go a long way toward improving your skills with this instrument.

It also causes the fingers to hurt more because the tips engage with the strings frequently. You’ll need to keep practicing to build up some calluses. Once they start forming, you won’t feel as much discomfort.

Your hand might cramp when using this position at times. That discomfort typically happens when you’re pressing your thumb too hard into the neck. Try to relieve some of the pressure to see if it feels better.

You can also stretch out the hand by moving the fingers backward a little with counterpressure to decrease the pain levels.

3. Take a Final Check of the Instrument.

If you continue to have problems with unintended dead notes after improving in the first two steps, it’s time to isolate the issue.

You might notice that your Gmaj doesn’t ring as clearly as it should. Play the notes individually, listening for muted tones in each one. Once you find the culprit, it’s time to identify when the sounds end up being a bit muffled.

Is the pressure on the strings correct? Has one of your fretting fingers pressed on two of them instead of one?

Do you have a finger that wants to drop to touch the fretboard?

At this stage, it might not be a playing technique that creates the problem. You might have a string that needs to get replaced. There might be an electronics issue on the instrument, or even the tuner might not be set correctly.

Once you isolate the problem, you’ll want to try to correct it. That’s a process where you keep eliminating items one-by-one until you find a solution.

Best Way to Learn How to Play the Guitar at Home

The best way to practice the guitar at home is to use YouTube videos and lessons apps to work on your technique. As you get to know the instrument better, you’ll train your ear to hear when a chord isn’t played correctly. Once you get to see the hand placement, it helps to learn how to read sheet music.

I highly recommend investing in a student guitar to see if you’ll like playing this instrument. Some people fall in love with the idea of being a musician only to discover that the strings don’t agree with them.

There’s nothing wrong with that outcome. We all have different likes and preferences! It just doesn’t make sense to buy a $5,000 guitar when you’re not sure that you’ll keep playing it. 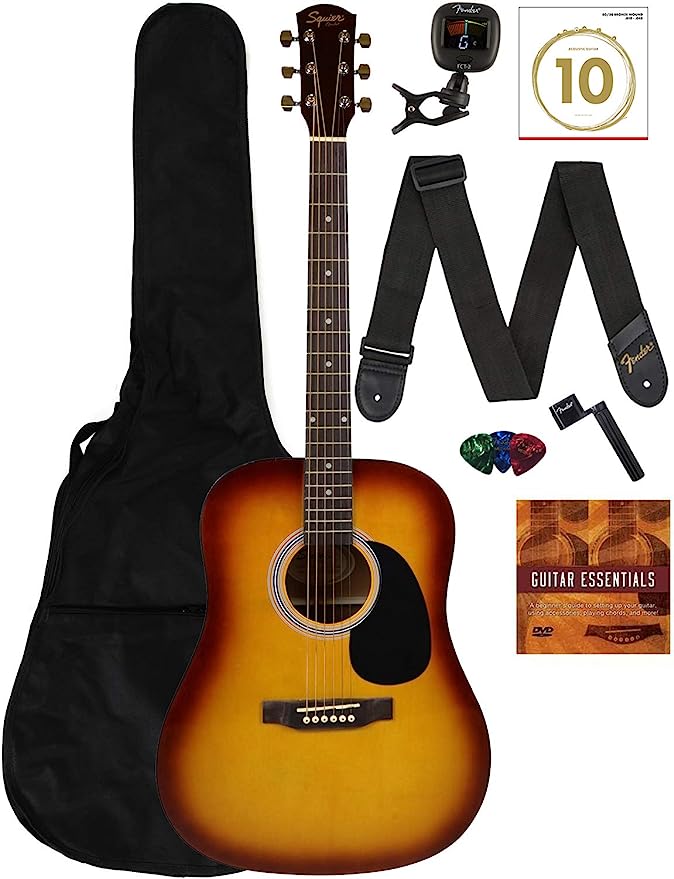 Fender Squier Dreadnought Acoustic Guitar Get it on Amazon

That’s why the Fender Squier dreadnought acoustic guitar makes sense as an investment. You’ll get the essentials needed to get started, along with an instructional DVD to help you learn your first chords.

This kit comes with a tuner, gig bag, string winder, strap, strings, picks, and more. It’s everything you need to start your journey.

Squier Bullet Mustang Electric Guitar Get it on Amazon

If you want to learn the electric guitar, the best choice is the Squier Bullet Mustang.

It delivers the six-in-line tuners that are the trademark of the Fender brand while using the alternative name.

The look and feel of this model are similar to a Strat, but you’ll pay a lot less to start playing.

I love how lightweight it is, creating lots of sustain while delivering authentic notes with the dual humbuckers.

Squier PJ Electric Bass Guitar Amplifier Get it on Amazon

When you prefer to learn how to play the bass, the Squier PJ Electric Bass comes with a beginner’s pack that includes a rumble 15 amp.

It’s an excellent choice for practicing intended dead notes while receiving Fender’s quality and craftsmanship guarantee with your investment. You’ll get a strap and cable with this investment.

Dead notes aren’t great to hear unless the intent is to put them into the music. You’ll see those designations in the sheet music.

With a little practice, you’ll find this technique can take your skills to the next level!