If you want to find the best guitar to accommodate your playing style, one of the instrument’s attributes to consider is its finish.

You can find two standard options offered for sale today. If you prefer something vintage or old-school, a nitrocellulose lacquer should be your preference. It’s perfect for the musical traditionalist who loves the sound from the industry’s Golden Era in the 1950s.

When you want something more modern, a polyurethane finish delivers the results you want. You’ll find it is more resistant to wear while offering more gloss.

If you’re wondering which option is better, here are crucial points to consider when reviewing the nitro vs. poly debate for your guitar finish.

Nitro vs. Poly Finish – Which Guitar Finish Is Better?

Poly guitar finishes tend to be the most popular because they’re thicker and stronger than nitrocellulose (nitro). That produces a glossier look that’s relatively simple to create. Their strength also resists cracks with continued use, reducing the risk of contraction and expansion.

When Gibson and Fender were the primary names in guitar manufacturing, virtually every instrument they released in the 1950s, and most of the 1960s, involved a nitro finish.

It was the go-to choice since the material was relatively easy to apply and delivered a glossy finish.

As research into volatile compounds expanded in the late 1960s, the decision was made to restrict how nitrocellulose could be used, distributed, and manufactured.

That made the product harder to use for mass production, which led to the eventual implementation of poly.

In the 1970s, almost every mass-produced guitar from the major brands in that era went to polyurethane or polyester if the work happened in the United States.

The MIJ (Made in Japan) brands took a different approach to use nitro. Many of them still use the traditional finishing process with nitrocellulose while taking precautions to avoid environmental damage.

If you want to buy a guitar with a nitro finish today, your best brand options are Momose, Crews, Van Zandt, Navigator, Combat, and Moon.

Some companies are using a full nitrocellulose finish without a sealer. Others offer a sealed nitro result only, while a choice growing in popularity is a hybrid design that uses a thin poly sealant on top of an initial nitro coat.

Fender still offers nitro topcoats on their guitars, but it is almost impossible to find one that doesn’t include a poly sealer. Gibson has several models that also still offer nitrocellulose.

What to Know about Nitro Guitar Finishes

The nitrocellulose finish has been available to woodworkers for nearly a century. It was originally put on everything from automobiles to saxophones to preserve them.

Gibson and Fender used this finish on their guitars almost exclusively through the 1960s. If you own an electric guitar from this era, you’re 99% guaranteed to have nitro. The only exceptions would be the acrylic options that came out periodically.

Even then, the added gloss from the nitrocellulose finish is what attracted musicians to this style during the Golden Era.

The lacquer used for the nitro finish is usually solvent-based, mixed with plant substances like cotton. It gets mixed with sulfuric and nitric acids, with the nitrocellulose serving as the binding agent.

Acetone is what delivers the shiny result, which is a highly flammable substance. Manufacturers use several finishing coats that get applied on multiple days, with each coat melting the previous one to reduce sanding work.

Once the final layer gets applied, the luthiers will sand and buff the instrument until the glossy finish is achieved.

■ Pros and Cons of Using a Nitro Guitar Finish

If you’re thinking about using a nitro guitar finish for your next instrument, here are the advantages and disadvantages to consider.

When you start shopping for guitars with a nitro finish, your first stop should be at the Fender or Gibson custom division.

These departments produce excellent instruments that capture the essence of those older designs.

Nitro was typically used on the most expensive guitars because the time-consuming process required several layers to achieve the desired outcome.

This finish also requires hand-buffing and sanding to ensure a high-quality result occurs.

If you want an instrument with modern electronics and a vintage look, nitro works well with relic-based processes.

By purposely damaging a guitar to make it look older, you can manipulate the nitrocellulose to achieve the desired aesthetic profile.

What to Know about Poly Guitar Finishes

Polyurethane (and polyester) guitar finishes are the industry standard today. When you look at the mass-production procedures of modern instrument manufacturing, this option has been the most common choice since the late 1960s.

Although the physical problems with nitro played a small role in this change, it is more about the fact that nitrocellulose is a high-VOC product.

Those volatile organic compounds came under strict regulation when it was discovered how much environmental damage they could cause, forcing all guitar brands to look for something new to use.

Anything with a low VOC profile is considered safer to use on a guitar compared to nitro. Poly is popular because it’s based on a synthetic resin recipe. That means no solvents linger on the instrument, even though it hardens completely.

You don’t need to apply multiple poly layers to get the glossy finish wanted with a modern guitar design. It only takes one effort to achieve the final look, saving time and money.

■ Pros and Cons of a Poly Finish

If you’re thinking about using a poly guitar finish for your next instrument, here are the advantages and disadvantages to consider.

The poly finish has become the customary choice in today’s guitar manufacturing. Since nitro is a highly regulated product, the time and expense of ensuring its safe application are not worth using on a mass scale.

It ultimately comes down to each person’s preferences for their guitar and playing style. If you don’t like how a poly finish feels, finding a nitro instrument is your best option.

The reverse can also apply.

Whether you prefer a nitro or poly finish, the final decision about playing a guitar should involve its sound, sustain, and overall tone. I’d rather have an instrument that can hold a note for days than worry about how something feels.

Although I’m not discounting the need for comfort when playing, I’ve found that many musicians spend too much time thinking about the nitro vs. poly debate instead of finding something fun to play.

If you’re looking for a great guitar, either as a beginner or a pro, here are the options that I’ve added to my collection in recent months and years because of how they perform.

Fender American Original 1960s Stratocaster Get it on Amazon

I fell in love with the original Strat sound the first time I heard it. That’s the instrument that caused me to become a musician, and the Fender American Original 1960s Stratocaster brings back that experience.

It offers a thick C with a maple neck and rosewood fingerboard to deliver the traditional playing experience.

What I appreciate the most about this instrument are the triple single-coil pickups. You’ll get that vintage sound you want while having a fun playing experience. It’s a whole tone that demands attention without being self-righteous about it.

I became interested in non-standard setups after a friend converted from the electric guitar to the mandolin.

As he got better with the new instrument, the practice helped him become a better player on both options. That progress encouraged me to continue my learning journey.

After I stumbled upon the Ibanez Axion 7-string electric guitar in my local shop, it was love at first sight.

It uses dual humbuckers with a voice switch volume knob to deliver tons of customization.

Although it doesn’t come with a case, there isn’t anything cheap about this instrument. It handles virtually any playing style while delivering more depth to your melodies with that extra string.

Fender Jim Root Jazzmaster electric guitar Get it on Amazon

Although I’m not the biggest fan of a solid-body guitar because of how heavy it can feel after a couple of hours, this design checked every box for me with my playing style.

It uses EMG 60 and 81 humbuckers for the neck and bridge, offering one of the best tones I’ve ever heard. The sustain is crazy good, offering natural resonance that captures the listener’s attention.

The satin-nitro finish in flat black on the Fender Jim Root Jazzmaster electric guitar was the one thing that held me back initially.

It’s a different look than what I’ve got in my collection, but the no-frills approach it delivers makes it a great player. I didn’t have any issues without there being dots on the fretboard, but some players might. 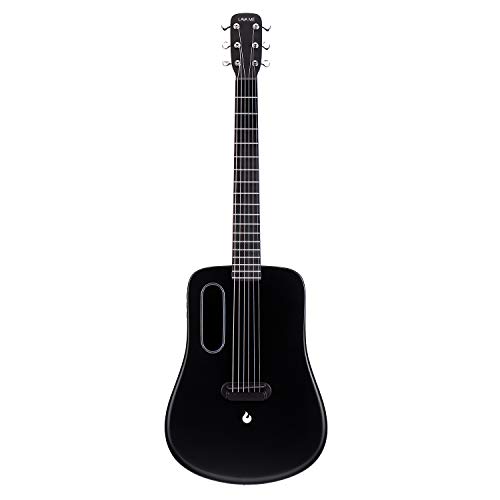 LAVA ME2 acoustic electric guitar Get it on Amazon

I’ll admit that buying an off-brand guitar was not high on my list of things to do when I ran across this beauty the other day. Even though the body is only 36 inches, the range frequency and tone delivery are impressive.

It’s easily one of the lightest instruments in my collection, weighing less than four pounds. You can take it with you almost anywhere, turn on its pickups, and have some fun playing.

The LAVA ME2 acoustic electric guitar has a receiving mic that can pick up and embellish the percussion in the environment, making it a lot easier to keep track of where you are with your rhythm.

It uses carbon fiber to keep the weight down, including with a high-pressure laminate carbon graphite for the fingerboard. It takes some time to get used to playing it, but the results are surprisingly great.

Is a Nitro or Poly Finish Better for a Guitar?

If you’re starting a new guitar build, you might wonder if a nitro finish is worth the investment compared to poly’s qualities.

Musicians often prefer the look and feel of a nitro finish, but that doesn’t mean they’ll turn down a great instrument with poly.

It’s a different story when you’re working with a guitar from the Golden Era. You want a nitro finish instead of acrylic because the sounds are much better.

I’ve found that many musicians want to scratch the nitro itch by embracing nostalgia. Since everything seems better in retrospect than what it was when living through the moment, it feels good to pick up one of those older guitars.

What I’ve found is that the tonal difference between a vintage nitro and a modern poly is virtually the same.

The best advice is that if you select a nitrocellulose finish, you keep your alert levels high to reduce the risk of experiencing unwanted damage.

Most musicians don’t base their buying decisions on the finish alone. Think about how the guitar sounds and functions first. That’s the best way to resolve the nitro vs. poly debate.