Playback systems typically use one of two speaker types. It can be monophonic (mono) or stereophonic (stereo).

The first option provides a single channel for music distribution. That means the same waveforms get sent to all of the speakers in the audio setup.

If you have a stereo-based system, you have two channels. They’re designated “left” and “right,” distributing different information to make the audio feel more realistic or lifelike.

The best time to use stereo for audio recording or playback is when you want to create an impression of sound source localization. It’s a technique that makes it seem like you can locate the exact place where you detected the noise.

When you create music or enjoy listening to different audio productions, several benefits of both styles might make one better than the other for your needs. That’s why it is crucial to review the advantages of both types.

Mono vs. Stereo and When to Use Them

The difference between monophonic and stereophonic sound involves the number of changes used for playing or recording audio. Mono signals use a single channel, while stereo uses two for these activities. That process allows stereo to offer width perception that mono does not provide.

Monophonic sound has all of the audio signals mixed into a single track. They’re routed together into one audio channel for playback, ensuring that you hear the complete mix simultaneously.

If you’re wearing headphones while listening to a mono track, you’d hear the same sounds in the left ear as you would the right.

This trait allows sound systems to have multiple speakers spread throughout the room to create a surrounding effect. Since the signal doesn’t contain level info or arrival time data, you don’t need to worry about replicating or simulating directional cues.

That’s why some of today’s most popular choices for mono sound include single-channel clusters, split clusters, and distributed speaker systems.

When you have stereophonic sound available, you’re transmitting two independent signals through different channels into a speaker pair.

This design replicates the sensation of hearing a live performance, even if the only sound on a recording is that of a person speaking.

The independent signals do an excellent job of emphasizing sounds in each channel to create more depth. It enables sound recreation for individual musicians and instruments from different areas.

Although stereo sound has some exciting benefits to consider, it also has one primary disadvantage.

Unless a listener places themselves in the center between the two speakers, the experience will feel unbalanced. There is no way to correct the audio imaging that occurs based on physical placement.

What Are the Pros and Cons of Monophonic Sound?

Although most sound systems use the stereophonic approach today because of how recordings are generated, you can still find some distinct advantages to the single-channel methodology.

Monophonic sound works best for home entertainment systems that want to include an AM radio, turntables, or older equipment. If you’re going to listen to anything else, the better option is to invest in stereophonic products.

What Are the Pros and Cons of Stereophonic Sound?

Stereophonic sound uses reproduced signals with level and phase relationships so that an image of the original source is hearable to the average listener. That’s why the independent tracks often feel like they have a direction to them, even if you’re standing still between two speakers in your living room.

When you have stereophonic sound available at home or through your entertainment equipment, the outcome creates a more immersive listening experience.

Even if you’re not directly centered between a couple of speakers, you’ll still notice the difference that having two tracks makes compared to the singular mono channel.

What You Need to Know about Interaural Level and Time Differences

When you hear a blended audio experience from two or more channels, it becomes possible for the stereo system to create phantom images. That means your brain thinks that the sound comes from the middle space between the speakers instead of the right and left channels alone.

That outcome is referred to as the “stereo image.”

One of the cues that helps create that process is called the ILD (interaural level differences). It’s the changes in sound levels between your left and right ears.

Since soundwaves get reduced over a distance, the audio becomes quieter as it travels further. That means when sound originates in front of you, the time it takes to reach either ear is similar, which means the volume sounds relatively identical.

If the audio is on your left side, what you hear will be louder in that ear than it is on the right. The opposite is the case if you hear something in reverse.

That’s how a stereo image gets created. By panning the audio between the channels, the tracks fool the brain into thinking that something is present in the environment when it is not.

Another option is called the ITD (interaural time differences). Since soundwaves travel at a specific speed, audio that originates from one side of the body will reach the ear faster than it will on the other. Your brain will tell you where it thought it heard the transmission point because of this effect.

When you listen to music in mono, this information disappears from the output. Although you could hear multiple sound points through your equipment, the result is that the equal mix feels flat and uninspiring because there’s no variety.

This outcome happens because of the Haas Effect. The ITD is so potent that sounds with equal volume will still have an origination point when the sound waves reach one ear before the other.

That’s why some mixes include delays in one track. It adds perception to the listening perspective, even if all of the audio cues are present with equal volume.

If you have a stereo microphone, you can produce a similar result when broadcasting your voice throughout a PA system.

What Is the Best Stereo System to Get Today?

If you’re looking to improve your home audio equipment, I highly recommend using the Sony SHAKEX10 System with Bluetooth®. It uses one-touch NFC pairing for supported profiles, has compatibility with several smartphone apps, and improves streaming with LDAC. 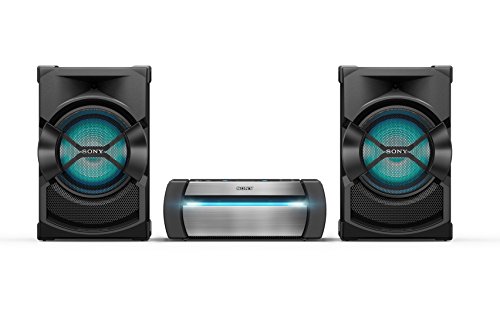 Sony SHAKEX10 Home Audio System Get it on Amazon

You’ll receive two speakers and a central unit with the Sony SHAKEX10 Home Audio System. This design allows you to enjoy monophonic tracks when they’re recorded or streamed to the equipment. It also provides the option for stereo sounds to enjoy all of your favorite performances.

It comes with an FM tuner with the standard range, a guitar input for practicing, and the option to incorporate DJ effects when playing tracks.

LED lights come in the speakers to add even more charm to the party atmosphere. If you want, you can even connect a microphone to sing along with the song.

Even if you don’t have a band, the karaoke features allow you to hook up the equipment to your television. Stick in a favorite CD, watch the lyrics, and sing along!

It comes with two microphone inputs, song reservation features, and a built-in vocal fader to sing with all of your favorite CDs.

What stands out the most about the Sony SHAKEX10 is the bass that comes from this unit. The design incorporates an internal folded horn to increase acoustic pressure with the product.

This outcome creates additional amplification, pushing more air through the system to give the lower frequencies more attack and boldness.

When you know the differences between mono and stereo sound, it’s much easier to adapt your equipment to meet your needs. Add in the Sony SHAKEX10 for some extra fun!