Charles “Buddy” Holly was a rising singer and songwriter who was taking the United States by storm in the 1950s.

Born in Lubbock, TX, during the Great Depression, he learned how to sing and play the guitar with his siblings.

Holly first appeared on television in 1952. By 1955, he was the opening act for Elvis Presley. That’s when the decision was made to pursue music as a career.

Eddie Crandall spotted him after opening for Bill Haley and His Comets, helping him get a contract with Decca Records.

On February 3, 1959, Holly was in a plane with two other artists that crashed soon after takeoff in Clear Lake, IA.

He was only 22 at the time, riding a charter to his next show. It was an event that Don McLean would immortalize as the “day the music died.”

The famous Fender Stratocaster that Buddy Holly owned and played mysteriously disappeared after the artist’s untimely death in 1950. The sunburst guitar was thought to have been lost the night the plane crashed with Holly, J.P. Richardson, and Ritchie Valens on board. The instrument turned up in Australia.

In a documentary called The ’54, artist Gill Matthews claims that he may have stumbled upon the legendary guitar that Buddy Holly once played.

Matthews is a drummer and producer, but he also collects old Fender guitars as a hobby. The guitar was purchased about 20 years after the fateful crash.

The experts that producers interviewed for the documentary state there is an excellent chance that the instrument in Matthews’ possession is the original Buddy Holly 1954 Fender Stratocaster.

Although there is no way to verify the instrument’s authenticity, this find would be one of the most significant discoveries in guitar history.

You can watch the documentary yourself to craft your own opinion about Matthews and what he found.

Why Are Fender Stratocasters so Popular to Play?

The Stratocaster, or “Strat,” is one of the most popular guitars in music history. It’s a pop-culture icon that is what almost everyone thinks about first when they picture an electric guitar in their minds.

Strats were first released in the early 1950s. The popular genres of that era quickly adopted the instrument, and it remains the standard by which all solid-body guitars are judged today.

The list of the names of artists that have picked up a Fender Stratocaster is lengthy. Outside of Buddy Holly, you’ll find recordings by Bonnie Raitt, John Mayer, Jimi Hendrix, and countless more creating music with this instrument.

Why is the Strat such a popular instrument? Although everyone has their own opinions of why this guitar is the best, here are the most common reasons cited when talking about the advantages this design offers.

1. It Is a Consistent Design

Fender hasn’t changed anything about the Stratocaster in the past 60 years. Everything still looks great when evaluating the main features of the instrument!

Although the contours have been reimagined as different trends reach the music world, artists can rely on the following fundamentals.

Today, some of the most popular Stratocaster models are based on the vintage instruments that Fender produced in the 1950s.

That includes a 50-instrument limited run of the Buddy Holly guitar that went missing after the plane crash.

2. Designed for the Player

Leo Fender designed the Stratocaster to maximize each musician’s opportunities to create something unique with their talent.

Although Leo Fender wasn’t a musician, he enlisted the help of professionals who played his telecaster to provide input for this updated design.

By asking everyone what they would like to add, remove, or change, Fender’s goal was to create a perfect guitar.

That’s why the features have remained consistent over the decades, even as different trends have come and gone.

Strat owners love to customize their instruments. It’s relatively easy to swap out pickups to change the guitar’s sound.

You can also add a new pickguard to alter its appearance, alter the tremolo for extra sustain, or get more stability by upgrading to locking tuners.

Since the ways a strap is upgradable are pretty simple compared with other designs in the marketplace, modding this instrument has become a way to express oneself as an artist. The guitar can be tailored to virtually any tonal preference or playing style.

You can also find numerous aftermarket accessories or parts that can take a stock Stratocaster to something completely customized without paying someone to create the results you want.

Since the Stratocaster is such a customizable instrument, you can find the guitar in the hands of professional musicians in nearly any genre imaginable.

From heavy metal to funk, the Strat is a go-to choice for anyone who prefers the unique twang that comes from this design.

If you only have one guitar that you can bring with you to a gig, almost everyone would choose a Fender Stratocaster.

5. It Lets Your Personality Shine

Although the stock sound from a Strat can sound a lot like a bell, musicians can alter the tone to produce an endless list of different effects and sounds.

When you hear artists like Jimi Hendrix, Eric Clapton, or Buddy Holly, you know who plays the guitar because the instrument represents their style.

You don’t have to be famous to benefit from this advantage of Stratocaster ownership.

One of the best ways to learn how to play the guitar is to experiment with the different sounds you like while playing this Fender instrument.

Artists have had a connection to the Stratocaster from the start of its presence in music in the 1950s.

The number of signature series that Fender has released over the years is unmatched compared to other guitar makers.

You can find options that range from Wayne Kramer and his punk stylings to the blues that Chicago legend Buddy Guy creates.

Fender does an excellent job customizing the options that artists want to have guitars perfectly tailored to their playing needs.

Not only are these instruments collectibles, but they are also an easy way to enjoy playing with a specific sound and style.

People often say that imitation is the best form of flattery. If there is truth to that statement, the Fender Stratocaster is the best electric guitar that has ever been made in human history.

When you look at other designs from different brands and manufacturers, it’s evident that the Strat inspires them.

What’s so remarkable about the Stratocaster is that the instrument was Leo Fender’s second shot at creating a perfect electric guitar.

Some companies have researched designs for decades and have not achieved a better result.

Does Any Guitar Come Close to the Buddy Holly Fender Stratocaster?

Although the Fender Stratocaster is an iconic instrument, the Gibson Theodore might be the one guitar that could dethrone the Strat’s status as the go-to instrument for everyone.

The Theodore is the first major guitar body update by a major brand in decades. It’s inspired by the legendary former president of Gibson Guitars, Ted McCarty.

McCarty is responsible for the Flying V, the ES-335, the Les Paul, the Explorer, the Firebird, and the SG.

When McCarty sat in meetings, he would often sketch new guitar designs. In 1957, he was at the height of his creativity while seeking to modernize ideas to help all players embrace this wonderful instrument.

On March 18, 1957, McCarty detailed and signed a drawing for a solid-body instrument that Gibson never produced – until now.

The Gibson Custom Shop presents the Theodore as a limited run of 318 guitars available in three colors.

It uses a scimitar headstock, double Florentine cutaways, and a walnut center strip on an alder body.

The instrument is balanced, lightweight, and quite comfortable with its unique, almost angular design. The powerful P-90 pickups produce a rich diversity of tones and notes for musicians to enjoy.

Gretsch Guitars Makes a Close Replica of the Theodore

Custom guitars from Gibson typically start at $5,000, with an unlimited cap on the final price based on the features and intricacy of the design. Musicians who want the benefits of a Strat or a custom Gibson while sticking to something more budget-friendly can look at Gretsch Guitars for an alternative that sounds as good. 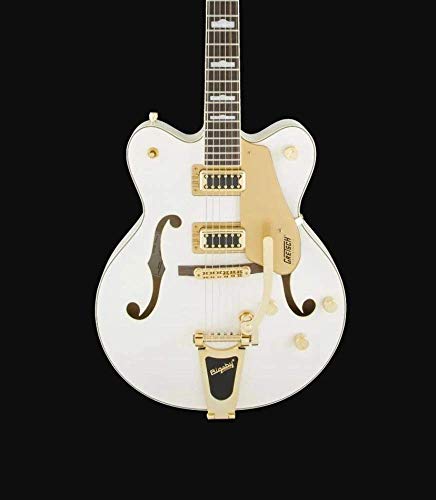 Gretsch G5422TG Double Cutaway Electric Guitar Get it on Amazon

One of my all-time favorite guitars is the Gretsch G5422TG. It’s an electromatic double-cutaway Hollowbody with F-stops that deliver projected tones and notes that you can hear at the back of the room.

It’s all about the tonality. The resonance cabinet with this Gretsch design delivers a superior result because of its more extensive, rounded base.

That gives the instrument acoustic treatments that don’t come from most Strats or Gibson guitars.

Most guitars need a bit of a treble boost when they come out of the box. You don’t need to make adjustments with the Gretsch Electromatic Hollowbody. Everything is above standard, allowing the instrument to sound as good as it looks.

It even feels as great as it plays. If you want a great guitar without the price tag that comes from custom shops, this instrument needs to be in your collection.

I’ve used the Gretsch G5422TG to record albums at home, play small gigs, and even for sing-a-longs at our annual backyard gathering each summer. You won’t be disappointed with the results this instrument provides.

The only guitar that might be better would be Buddy Holly’s 1954 Strat.