It’s been possible to have bi-wired speakers since the late 1980s. Although it was thought to be a bold move that would fizzle out when the concept was first introduced, this practice is now considered standard.

The idea behind bi-wiring is that a separate cable is used for each terminal pair on your speakers. You’ll need to remove the shorting pieces that are typically found between them.

That means you’ll use double the cable than if you adopted the more traditional method that uses a single wire, but it delivers some unique benefits to consider.

When you bi-wire speakers, some obvious sonic advantages develop. You can push the preferred frequencies through the system, getting a more significant emphasis in the mid-range without disrupting the base.

Is it worth upgrading your speakers to bi-wiring if you haven’t done so already, or is this methodology an innovative way to get you to buy more cable?

Bi-wiring speakers is a method of hooking up your system to make use of the double terminal configuration. You’ll run one positive and negative to the HF and LF network from the power amplifier. That means the frequencies go to the appropriate discharge areas.

It’s easy to tell if your speakers can get bi-wired for your listening enjoyment.

When you look at the back of the cabinet, you’ll see four connection terminals available to use. If there are only two, that means you have a single-wire setup instead.

If you haven’t tried to bi-wire speakers in the past, it might be tempting to do it because audiophiles and hi-fi enthusiasts talk about this process consistently.

Although the audio quality does improve on most units, you’ve got the added expense of additional cable to consider.

Critics might point to the added cost as a detriment, but the economic reality of speaker cable is that the product is affordable.

You can find highly-rated 16 AWG audio speaker cabling with polarity markings priced for under $20 for 50 feet. That cost is negligible when considering the price you’re paying for the speakers!

Another complaint about bi-wiring speakers vs. single-cable designs is that there aren’t any published benefits to the practice from a research standpoint. Although that point is valid, the real decision is up to you.

If you like the sound of speakers when they’re bi-wired, then nothing else matters.

When you can’t tell the difference between the single or double approach, it makes sense to go with the style you prefer – even if it’s the cheapest one.

You’ll find that everyone has an opinion about bi-wire speakers that work for them, but that doesn’t mean their perspective will do the same for you.

How Would I Hook up a Traditional Speaker to an Amplifier?

When you take a standard speaker with two terminals (one positive and one negative), you will route the red wire to its companion and the black to the other to reproduce frequencies.

In this setup, the bi-wire configuration is inside the speaker itself, using the one external connection to route to the HF and LF networks.

This standard configuration uses a small driver, which is called a “tweeter,” to produce frequencies above 2 kHz on the HF network.

The larger driver, also known as the “subwoofer,” reproduces what is available on the lower end.

Speaker manufacturers create this design because it’s not cost-effective for them to design a single driver that can produce the entire audible spectrum with appropriate EQ.

Since there’s a split in the hookup, a passive electrical circuit becomes necessary to filter the frequencies.

This setup ensures only the higher frequencies go to the tweeter and the lower ones head to the subwoofer.

Since the incoming current splits between the crossover network components, the outer terminals only need a single input.

The circuit can’t produce a steep cut-off to turn the frequencies over, but it does create a graduate curve that remains above or below the frequency.

If the total power on a crossover response curve hits 85 dB on the SPL, you will reach a tipping point where the subwoofer fades away as the tweeter starts revving up.

That’s why some songs can sound muted when using this methodology. If the frequencies are in the 1,000 Hz range, neither speaker can maximize its performance.

Why Should I Separate the High Frequencies from the Low Ones?

It helps to think about your speakers like a highway, like a U.S. Interstate or an international equivalent.

You have the slower traffic sticking to one lane, while the faster vehicles pass them in the other ones.

If you have everyone sticking to the rules, the traffic flows reasonably well with this structure.

Although the occasional car gets stuck behind a slow driver in the one lane, they can eventually pass to get back up to speed.

That’s what it is like to have a bi-wire setup for your speakers. The frequencies that head toward the tweeter are the fast cars, delivering the high Hz that you love to hear in the high end of the EQ band.

Your lower frequencies have the slower, broader sound waves that the subwoofer manages.

When the two arrive at their outputs simultaneously, you’ll get an impressive sound with a balance that lets you hear the entire frequency spectrum.

Even if you make EQ changes to your setup, you’ll get the full listening experience.

When you have the high and low frequencies on the same line, that four-lane highway gets reduced to two lanes.

You can still pass a slow car, but you’ve got to wait until there isn’t any traffic coming in the other direction.

Think of the filter within the traditional speaker design as the two yellow lines on the highway.

It’ll offer passing zones at times, but you’re typically stuck behind the slower traffic until you arrive at your destination.

The traditional speaker setup delivers a balanced result, but it doesn’t contain the simultaneous balance that the bi-wire design provides.

That’s why having four terminals is better than two when you want to listen to music.

It prevents your frequencies from getting stuck in a traffic jam.

Although critics might suggest that bi-wiring is a marketing gimmick to expand wire sales, there is a practical benefit to this investment.

When an internal filter controls the directions of frequency travel, it creates an intermodulation distortion that you’ll hear as the sounds enter the room.

You might not pick up the harmful effects because you’re used to hearing them in your music, podcasts, and other audio playbacks.

Some people might not even hear the distortion because it typically happens at the higher frequencies. In the standard single-wire setup, you’ll pick it up at two primary points.

The intermodulation can raise noise and distortion within the cable to levels of nearly 40 dB with the standard setup.

When you use the bi-wiring approach, you’ll attenuate the lower frequencies while reducing IMD dramatically at the upper end.

Even when you make the change on the same speaker, you can notice a significant difference happen immediately.

Why does the distortion disappear in the bi-wire setup? When you have a positive and a negative cable for the tweeter and subwoofer, all of the frequencies know where they need to go.

That means they’ll arrive faster, have more clarity, and deliver an outstanding performance for your entertainment system.

If the speaker needs to offer directions to the incoming frequencies, that minimal delay and the extra distortion can cause some noticeable issues to the overall sound quality.

Best Bi-Wire Speakers You Can Own Today

When you want to get the best audio possible from your sound system, a high-quality set of bi-wire speakers can deliver a positive outcome. You’ll create dynamic listening experiences for anyone in the room.

If you shop for bi-wire speakers, you’ll want to use that specific phrasing to find the best products in this category. Should you look for “terminals” or “inputs,” you’ll find OEM parts for your equipment instead.

You can bypass that issue by reviewing the following products to see if they can fit your listening needs.

If you want a best-in-class floor standing speaker for your home, this design is the Polk Monitor 70 is the investment you’ll want to make.

It delivers crisp sounds that fill up the most spacious of rooms for a very competitive price.

You’ll also appreciate the magnetic shielding incorporated into the Polk Monitor 70. It can handle any placement need, including near your television. Polk Audio LSiM 705 Tower Speaker Get it on Amazon

When you select the Polk Audio LSiM 705, you’re adding a superior home theater speaker to your equipment.

It features the brand’s exclusive sonic engine that has smooth, effortless sound in the mid-range.

If you don’t mind building up your home entertainment system one product at a time, you’ll find that the benefits of the Polk Audio LSiM are worth the investment, even if you encounter the occasional challenge. When you’d rather get a pair of speakers to use for your home entertainment system, the Jamo Studio Series S809 delivers a reasonable result.

This flagship product provides Dolby Atmos on a budget, offering incredible acoustics and a patent-pending topper for a world-class listening experience.

You’ll get a pair of the Jamo Studio Series S809 speakers for the price you’d pay for a single unit from other manufacturers. That’s why it is worth taking a closer look at this design. 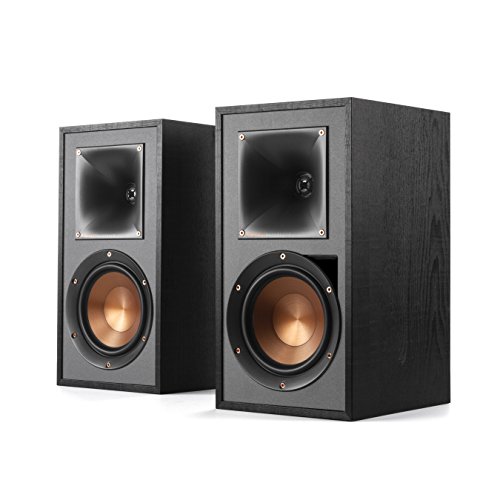 Klipsch R-51PM Powered Bluetooth Speaker Get it on Amazon

When you select the Klipsch R-51PM Powered Bluetooth Speaker, you’re getting a phono/line analog with switch and terminal, USB digital, and other connections for a well-rounded setup.

It also delivers Bluetooth tech so that you can stream all of your favorite playlists or audio files to the unit.

The Klipsch R-51 PM has an excellent sound quality, but it does tend to lean a little to the warmer side of the listening spectrum.

If you plan to listen to the speakers at higher volumes for an extended time, you’ll want to disable the EQ to reduce the bass. SVS Prime Pinnacle – 3-Way Tower Speaker Get it on Amazon

With a 5.25-inch mid-range driver, a composite glass-fiber cone, and absolute accuracy on the delivered frequencies, you’ll find that the SVS Prime Pinnacle 3-Way Tower can slam the bass with the best of them.

It can also provide clear highs and plenty of flexibility for any home theater system.

If you have a standard living room or entertainment area at home, the SVS Prime Pinnacle 3-Way Tower can provide surprisingly good results.

When you have a great room that you want to fill with sound, you might need to step up your power another notch.

A Final Thought on Bi-Wiring Speakers

If you have speakers with four binding posts, you can take advantage of the bi-wiring option.

Although you’ll need double the cable to accomplish this outcome, the setup can reduce the intermodulation distortion that happens when you don’t have linearity in your equipment.

When you hit the mid-range, the IND is significantly reduced when taking advantage of the bi-wiring setup. The most notable gains happen around 300 Hz, maintaining the benefit up to the 1,000 Hz level.

You’ll also see the higher frequencies attenuated with this setup, which means you won’t get massive spikes in your decibels.

That means you’ll get everything you love in the low end, lots of clarity in the mid-range, and a balanced upper scale that modulates what you hear.

If you don’t mind paying a few dollars more for the extra cable, it’s worth it to pursue this listening experience.