Growing up in the Midwest, my family always felt like it was essential to support local businesses. It’s also traditional to start learning an instrument around the fourth or fifth grade where we lived.

I vividly remember my music teacher administering a musical IQ test. We got to choose the instruments we wanted to play based on the results. I really, really, really wanted to get involved with percussion.

When the test scores were announced, mine was the lowest in the school’s history. That meant I got the last choice. For whatever reason, that meant I got to play the guitar.

That meant my folks invested in a Hamer guitar for me. That’s how I became known as the Slammer Hamer enthusiast.

Hamer Guitars was founded in 1973 by Jol Dantzig and Paul Hamer in Wilmette, Illinois. The early instruments produced by this company were similar to the Gibson Flying V and the Explorer. They’d eventually add the Sunburst and other designs, becoming the first boutique vintage brand.

Hamer Guitars was the first to produce a 12-string bass, but it was the Slammer by Hamer series that really got the musical world’s attention. It was a cheaper line of Asian-built instruments, which was eventually discontinued in 2009.

In 2012, Fender announced that Hamer Guitars would no longer produce instruments and that the company would cease its operations. KMC Music announced four years later that the re-introduction of import Hamers would occur with five different models.

The 2017 lineup announced in a company’s press release did not include a reissue of the Slammer.

Most people say that you get what you pay for when purchasing a guitar. In most situations, that’s a true statement. It’s not quite honest when applied to Hamer Guitars.

I’ve always loved the tone that I’ve gotten from my Slammer Hamer.

Although the modern Slammers are the lowest quality product you can purchase from the Hamer brand, they don’t look any different than other entry-level instruments.

I’d recommend getting a Slammer Series guitar from Hamer. These instruments were made in the early-to-late 1990s (and a bit into the 2000s), and that’s what I played during the last years I was in band.

They’re made in Korea, have an above-average tone, and the workmanship is typical of what you’d find from high-level factories from this location.

You can choose from several models in the Slammer Series. I prefer the Hamer Centaura CT212, but another option would be the Stellar 1.

The differences in quality and sound from the Korean-made guitars to the ones imported from Indonesia or China are massive. It’s worth putting a little extra cash down to step up to the older instrument than to purchase a newer one.

You might find a Hamer Slammer for around $250 to $500 today. In comparison, a top-of-the-line Hamer USA instrument could easily retail for over $2,000 today. Even then, it’s probably underpriced for what it delivers.

Hamer Guitars started publicizing its instruments in 1974. The first advertisements were those small black-and-whites that you could find in the back pages of guitar magazines.

Hamer and Dantzig wouldn’t incorporate their business until 1976, with John Montgomery and James Walker joining the team. In 1977, they had enough business to set up a shop in Palatine with seven employees.

They didn’t have woodworkers on their team, so they outsourced that task to a Nashville company. The setup and painting were done at the Hamer shop.

The Sunburst became the first production guitar, reaching the market that same year. When Hamer started this series, they could make about ten guitars per week. That’s also when Rick Nielsen decided to start using their eight and 12 string basses on the stage.

A 1980 move took the company closer to Chicago. They’d stay there for seven years, until they approached Kaman Music to handle their sales. An agreement was finalized in 1988.

It was during this era when Hamer models started getting into the heavy metal genre. Judas Priest used their guitars extensively. That would lead to the brand’s two iconic guitars: the GT Custom and the Phantom GT.

Hamer continues living in Chicago, where he operates a retail framing company. After Fender bought the company, Dantzig continued to work for them until 2010. That’s when he decided to leave to build instruments by himself. 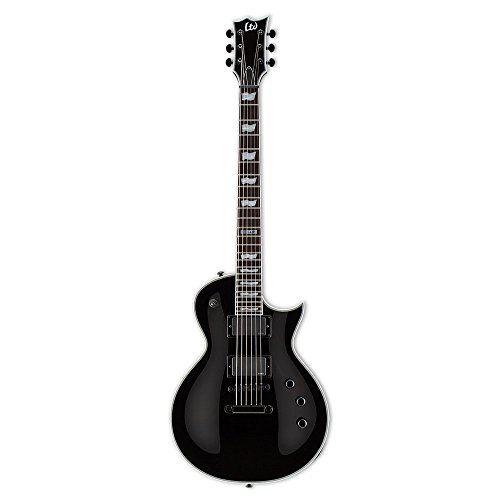 ESP LTD EC-401 Electric Guitar, Black Get it on Amazon

Best Alternative to the Slammer Hamer for Beginners

If you’re just starting on your guitar journey, it might not be easy to find a Hamer instrument that fits your needs. In that situation, I’d recommend the ESP LTD EC-401. You have the option for a standard fitment or a Floyd Rose bridge, but that’s just the beginning of your journey.

I love this guitar because of its three-piece mahogany neck. Your fingers fly across the strings, bending with comfort, while producing rock tones that satisfy. The pickup combo for the neck and bridge delivers something powerful and versatile that’s tough to deny.

The hardware with the EC-401 is pretty reliable. It looks brilliant on the stage, sounds fantastic in the studio, and encourages you to pick it up to do some practicing.

When you need a guitar that’s built to last, you can’t go wrong with this ESP model. 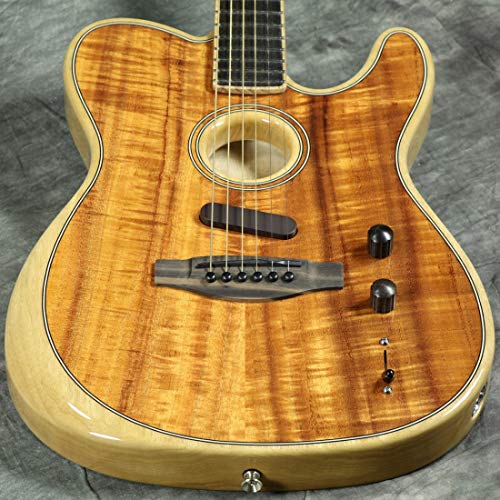 Best Alternative to the Slammer Hamer for Pros

When you’re curious about the Slammer Hamer as a pro, you can order it at your convenience. What you’ll discover is that the quality isn’t quite there to give you the outcomes needed for two-a-days and constant performances.

That’s why I pack my Fender American Acoustasonic Telecaster for those big shows or the recording sessions that need a consistent tone.

As a backup musician, I’ve found that this Tele delivers the ultimate playing experience. The Korina body and back match with the ebony fretboard and a koa top to create the crispest sounds you can imagine.

It uses tree pickups to work together for tone production, including Fender’s noiseless, with a modification knob that lets you blend to create signature sounds.

I’ve managed to shred solos and create bass tones for dubstep with this beast. You’re going to love what it can do as an entry-level pro model.

One of the things I always appreciated about my Hamer guitar growing up was its ability to duplicate acoustic tones. My stepfather bought me one of those off-brand beginners when he realized I could actually play, but it never did a great job of staying in tune.

I used that acoustic to work on chord placement, which took some pressure off my Hamer from a wear and tear perspective. 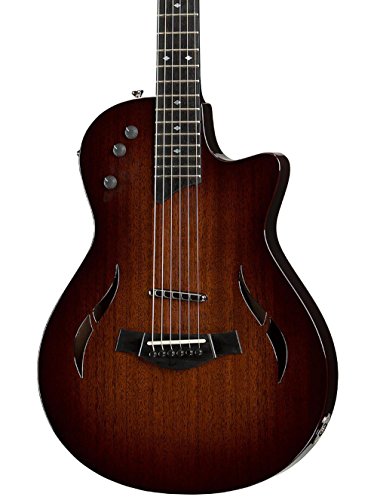 What I love about the Taylor T5z Classic is that it produces almost the exact sound I could create with my old Hamer. It’s a beautiful instrument, using a modified f-hole with mahogany and Sapele to create bold, yet mellow tones. The ebony fretboard is smooth and consistent, while the proprietary pickups give you lots of switching capabilities to consider.

When you’re ready to crank things to 11, the visible bridge humbucker cranks out various sounds that create a customized approach to your music. It uses a 21-fret design, but that won’t hold you back from anything.

A Final Thought on Hamer Guitars

You can often find used Hamer XT guitars for about $300 on the second-hand market today. That means you can grab a used Slammer from the best era for roughly half the price when you watch the market closely. Either way, you’re picking up an instrument that sounds great without destroying your budget.

I’ve been a huge Hamer fan for most of my life. The first one I ever got to play was in 1993, and that format made it sound a lot like a Fender. If you love a massive single-coil sound, you won’t be disappointed by pursuing this brand.

It’s not easy to find a brand-new Hamer today. That task is even harder when you’re looking for something from the Slammer lineup. The ones with a trapeze tailpiece tend to be the best, especially when you can grab one of the styles that look like the Fender guitars from the Rock Band video game era.

The Hamer Slammer Sunburst is an excellent choice as well, although I prefer the metallic red.

I still drag my Hamer out to play every so often. Although some alternatives deliver an excellent sound, it’s still an ideal instrument to use for noodling out a melody.