When you pick up a ukulele, the standard design offers four strings to play. It looks and feels like an instrument closer to a violin than a guitar because of this concept.

As an alternative to the four-string design, some ukuleles provide six strings like a standard acoustic guitar. You can also find an eight-string option, which functions similarly to a 12-string guitar with how it’s strung.

In a comparison of a six-string ukulele vs. an eight-string model, you’ll notice that both designs can change your sound without learning new chord shapes.

Six-string and eight-string ukuleles provide musicians with a perfect filling space and rich tones that aren’t delivered with a standard setup on an acoustic instrument. The extra strings bring extra energy and improved resonation because of the chorus effect produced. With the eight-string option, it’s like playing two at once.

Before upgrading to a six-string or eight-string ukulele, thinking about the pros and cons of playing a modified instrument is essential.

Although every situation is unique, these are the general advantages and disadvantages to expect when investing in this option.

If you are trying to determine if a six- or eight-string ukulele is appropriate for your playing style, here are the various factors in greater detail that can help you decide which type will work the best.

Is a Six- Or Eight-String Ukulele the Right Fit for Me?

Both ukuleles have doubled strings. The only difference between the six and eight models is that the first only doubles the A and C strings.

When you play an eight-string model, all are doubled.

That means you have a lower octave A on the six-string than the unison version found on the eight-string design. That’s why playing six gives you a more distinctive voice than the other options out there today.

When a ukulele sounds its best, it has a sweet spot where the harmonics blend together in a place of frequency heaven.

There’s enough contrast to keep the ear interested while the musician has fun experimenting with different options.

Each uke provides something uncluttered and rich, tonally diverse, and still distinctively Hawaiian. That’s why an alternative stringing method is such a great choice.

If you are wondering about a ukulele with this setup being the right instrument for your needs, it depends on your general experience with musical theory and stringed instruments. Playing six or eight gives you certain outcomes that playing for cannot provide.

When you are looking for a uke that gives a specific sound that you feel is missing from your current efforts and can’t figure out what is happening, moving to six or eight strings could be the answer.

It also helps to play six or eight when you have lots of solo acoustic gigs. This ukulele style has some impressive shimmering resident qualities that don’t come with the standard setup.

■ Is It Harder to Play a Six- Or Eight-String Ukulele?

Although I’ve heard people talk about how hard it is to play an instrument with extra strings, those statements are generally about 50% true.

When you play six or eight on a uke, it’s important to have your finger placement correct so that the note-shaping potential of the instrument stays intact. If you miss a chord, even by a fraction, you’ll hear the difference in the sounds that play.

I’ve always found it helpful to think of this setup as having one primary string with a little friend next to it.

When spreading notes, each finger holds down to strings instead of one. That means a little extra strength is necessary to achieve a proper result.

Anyone who has played an acoustic guitar won’t have problems adjusting to the thicker neck on a modified ukulele.

If you’ve only played four strings in the past, it might take a week or two to get used to the extra stretch that is necessary for fretting.

If you can find solutions for those potential concerns before the instrument arrives, is discover that it isn’t any harder to play six or eight strings than it is to strum four of them.

Best Six- And Eight-String Ukuleles in 2022

Here are the best 6 string and 8 string ukuleles you can get:

Let’s find out more about each one. 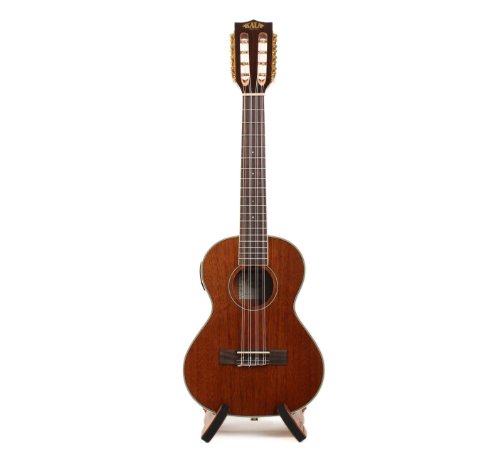 If I’m being honest, this ukulele isn’t the best one I’ve played. It’s the best instrument I’ve ever owned. It’s not even a competition.

When you have a high-quality uke, you need to play it daily to ensure that the strings settle a bit.

The instrument needs a daily routine to feel normal. If you miss a day, it’s a lot like forgetting to brush your teeth before going to work. Everything just feels off.

The sound is full and resonant delivering a robust sound that delights. When I’m recording something in Ableton, I like to use this instrument to add extra dimension underneath the acoustic guitar.

Even when I’m on stage, the results are remarkably consistent through any amp or PA system. The electronics are fantastic, the sound is beautiful, and it’s a whole lot of fun to play. 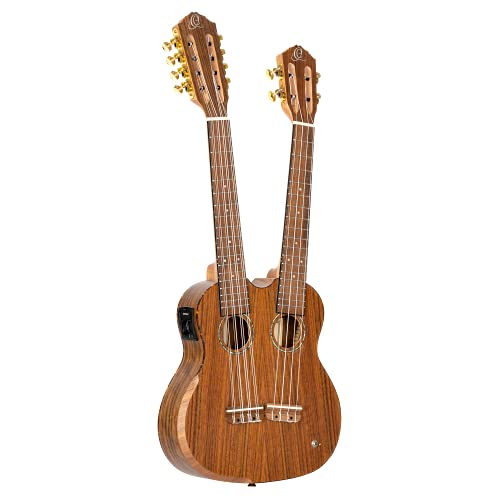 Although this ukulele is technically 12 strings, I’ve put it on this list because it’s such a great little piece for any collection.

It uses a double neck like some guitars, presenting an extended playing surface that delivers plenty of customization options for your music.

Oddly enough it’s the edging that I love the most about this setup, with the colorful fire-like bevel creating a classic-style look.

You’ve got to be careful when playing since the eight-string setup is relatively close to the four-string one.

If you’re aggressive with the follow-through, you can end up tweaking the other side of the instrument.

Other than that, it has a lovely sound that works with virtually any musical genre. Even if you only bring it out for conversation and the occasional performance, it’s still worth the investment. 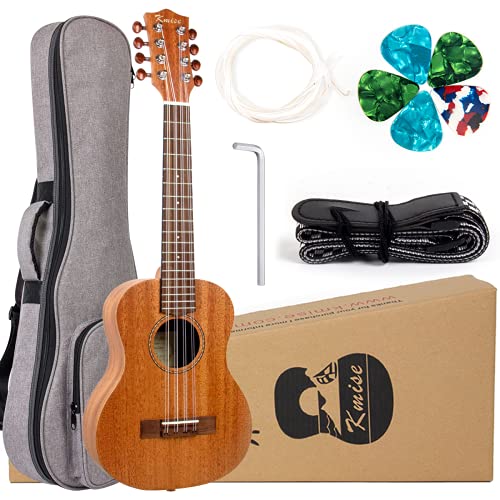 Kmise Tenor 8-String Ukulele Get it on Amazon

What I love about this ukulele is the quality of its strings. It uses Italian Aquila, ensuring that the resonant tones that come from the eight setup deliver something percussive and bright.

Instead of using steel for the gear, this design incorporates copper to take away a common corrosion point on ukuleles.

The walnut and mahogany combination for the body and fingerboard adds a touch of warmth to counteract the metal’s crispness.

Since it comes in a bundle, you’ll get picks, extra string, a strap, and an adjustment wrench to ensure your setup exceeds expectations.

It’s designed more for beginners, but it still delivers a profound sound that pros will love. 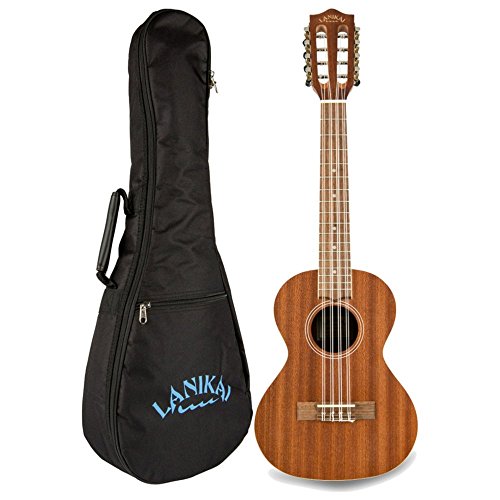 Lanikai Ukulele, Natural (MA8T) Get it on Amazon

This eight-string ukulele is appropriate for beginners or those who want to start thinking about recording or live performances for the first time.

The wider neck profile works well for a transition from the guitar, especially with the fret spacing. The nut and saddle are also made of bone, which gives the uke an impressive sustain.

The chrome open-back tuners help the ukulele have reasonable accuracy with its tone and note shaping, although it comes loose a bit more than I’d like on a long performance.

If you’re just practicing for an hour or two, it’s a stable instrument that offers a warm tone with lots of fill and extended resonance.

Once you get past the initial tuning challenges, this beautiful ukulele will be an important part of your collection – or serve as a memorable first instrument. 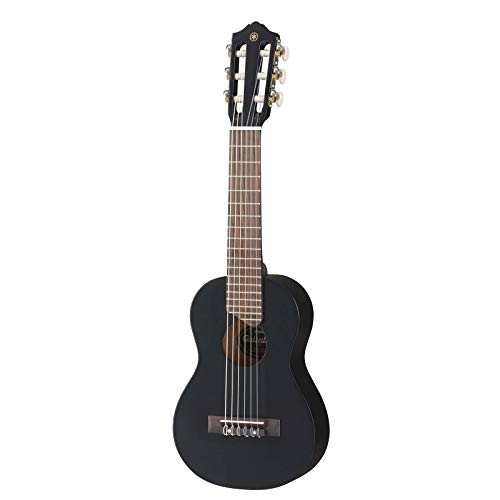 Yamaha GL1 6-String Ukulele Black Get it on Amazon

Although Yamaha markets this instrument as a combination between a guitar and a ukulele, it looks and sounds just like a six-string uke.

If you want plenty of attack and brightness in your sound, grab this one before it sells out. The top material is made of spruce, giving each strum lots of excitement.

The sides, ribs, and back are made from meranti, while the neck is nato and the fingerboard is sonokeling.

This combination creates a fast place for finger movement while taking the edge off the notes.

With this setup, you’ll receive stunning sonics that deliver lots of fill for virtually any composition.

I love bringing this instrument out to the campfire or when we’re lounging by the fire pit outside to set the mood.

How to Restring a Six or an Eight-String Ukulele

Take one string off at a time by detuning the one that needs to get replaced. It can be cut or unwrapped to accomplish this step. Take the new string, loop it up and behind, and form a knot at the bridge. Repeat for all six or eight strings before tuning them to the appropriate notes for your playing style.

I’ve found that buying strings that suit your level is just as important as selecting the correct ukulele for your tone.

It’s best to change the strings when they lose playability. You’ll notice flat spots, nicks, or grooves when this issue develops. They also struggle to stay in tune after you’ve broken them in with some playing.

Most ukes come with a tie-bar bridge today. You’ll slide one end into the small hole found at the bridge, allowing one end to come out the bottom.

You need about 1.5 inches of length. From there, take the string end through and loop it up and behind the string on top. Don’t forget to snip off anything excess to ensure you can get a tight and secure fitting.

The strings will stretch a bit as you play, which means they’ll need to get tuned. Anyone who expects instant results after this work isn’t familiar with the instrument.

I budget about a week after taking this step to ensure my uke is ready for its next performance.

Is it suitable to add a six- or eight-string ukulele to your collection? It depends on what you hope to accomplish.

For most players, the benefits of adding fill and resonance far outweigh whatever small disadvantages might creep up when performing, which is why it’s such a great investment to consider.