Gibson debuted the ES-335 guitar in 1958. It was a semi-hollow design that quickly earned the nickname “Dot” because of the Pearloid inlay developed for the instrument.

Several unique innovations were part of the original ES-335, including the guitar offering the first thin line archtop that musicians could purchase. In addition, the jazz box was spectacular, bringing everyone from BB King to Chuck Berry to the design.

If you don’t want to spend $3,000 on the current model, a riff guitar as an ES-335 copy can deliver a similar outcome for a much lower price.

The popularity of the Gibson ES-335 guitar over the past 60+ years has led several manufacturers to copy the design and performance of that instrument. Ibanez, Epiphone, Gretsch, and other brands have made reasonable facsimiles that offer a close sound and playing feel.

The Gibson ES-335 was the world’s first semi-hollow guitar sold commercially. It is still manufactured at the company’s Nashville facility.

Before 1952, Gibson was only making hollow-body guitars. Those instruments are prone to more feedback, which makes the sound problematic when amplified loudly. When the Les Paul came out, the solid body alternative seemed to fix the issues.

The only problem for musicians was that the solid body design was significantly heavier. That’s why the ES-335 was introduced. It was the industry’s first attempt to find some middle ground without impacting the sound quality.

Four guitars deliver the closest experience possible to the riff guitar that Gibson produced in 1958. If you’re not willing to spend the money on it, consider one of the copies listed below.

Epiphone Dot Deluxe Electric Guitar Get it on Amazon

Although you can avoid the extra fee for the Deluxe guitar and still get an excellent ES-335 copy, it’s worth upgrading to the flame maple veneer instead of dealing with the stock maple laminate. It provides more visual appeal while encourage the tone and feel to be a touch warmer.

This instrument comes with the classic Alnico humbucker in the next and a humbucker plus in the bridge. You get a lot of extra output compared to the PAF-style vintage pickups you’d expect with this design without feeling like it overpowers the instrument or musician.

The one advantage you receive over the Gibson design is less risk of feedback. For example, when the center block got added to the ES-335 to make it semi-hollow, it could offer some problems at its full volume. Epiphone corrected that issue.

It finished off the design with a mahogany neck, a pau ferro fingerboard, and 22 medium jumbo frets.

How the Epiphone Dot Deluxe Plays Next to the ES-335

When you play the Dot Deluxe, it tends to come in slightly hotter than the ES-335. That aggression seems to come from its overdrive, with the pickups chewing out a rock-worthy tone with a hint of the blues.

You have the option of rolling back the tone some on the neck to get something soupier or sludgier. The Dot Deluxe does an excellent job of staying clean and precise for jazz sounds as well, with a hint of woody goodness that makes listeners want to hear more.

If any guitar copy of the ES-335 can take Gibson off its thrown, it is this option from Epiphone. The only knock against it is that the vintage edginess isn’t quite there in well-rounded ways. 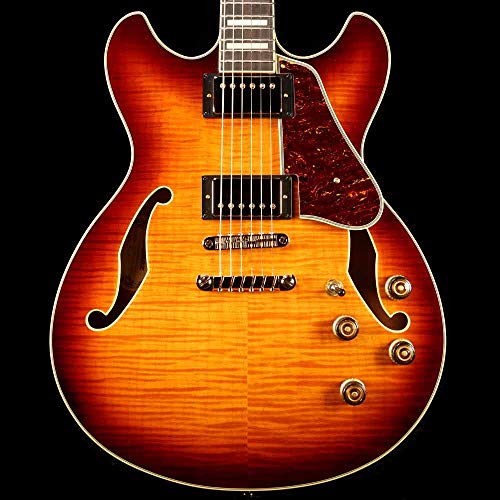 Ibanez AS93FM Artcore Electric Guitar Get it on Amazon

This guitar demands attention. The finish is where everything starts visually for the instrument, combining gold hardware and a custom vibe with steely colors to make everything feel designed just for you. The ebony fretboard is easy to play with, while the tailpiece design is so straightforward and tidy that you won’t believe how fast it is to change the strengths.

Although the nyatoh doesn’t feel as luxurious as mahogany with the neck, the 22 medium frets on a 24.7-inch scale play reasonably well for all experience levels. The volume and tone pots seem vintage in their design, featuring grooved clear plastic to avoid slips.

Even though it is a modern copy of the Gibson ES335, it still feels like a fantastic and original design that everyone can enjoy playing.

When you hear the Ibanez AS93FM go up against the ES-335, the instrument feels almost confrontational. The neck feels a little scratchy, but that doesn’t stop the Super 58s from delivering something sparkly.

Although the tone eventually comes out about even between the two instruments, the ES-335 has the edge over Ibanez with playability. Of course, once you get the frets dressed on the AS93FM, the play becomes similar, but you’ll always have a slight edge with your playing style when using the original. 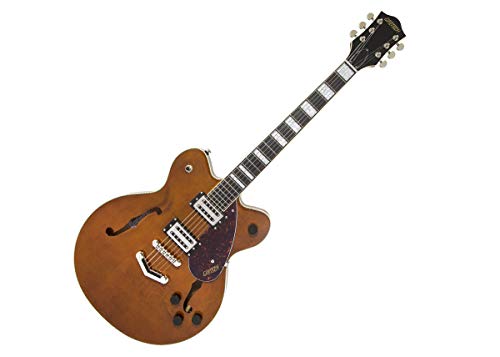 Gretsch G2622 Streamliner Guitar Get it on Amazon

With a remarkably affordable MSRP of only $449.99 in 2021, this guitar might be the cheapest high-quality ES-335 clone you can find today. There’s no catch to the price if you want to add a new instrument to your collection. The Streamline offers the tone and feel that the brand made famous while incorporating the traditional elements that have had musicians coming back for six decades.

When you play the G2622, you’re getting an instrument made with laminated maple for the top and back. In addition, the guitar’s center offers a chambered spruce block to support the pickups, allowing for greater resonation without adding a lot of extra weight while reducing feedback risks.

The BT-2S humbuckers equipped with this Gretsch Streamline let you play at high gain. You’ll notice more snap and bass than expected with this design, but it still offers the vintage voice that sings loudly when you hit the right note or chord.

How the Gretsch G2622 Streamliner Plays Next to the ES-335

Gretsch uses its brand design to incorporate a V-shaped stoptail. From the tortoiseshell pickguard to this glorious wooden stain work, you’ll get the closest to an ES-335 visually from a clone without worrying about having a direct copy. The instrument feels wired to rock, especially with the high-volume crunch working with the spruce block for excellent sound without feedback.

When other copies could fool the average listener into thinking that they have an ES-335 playing for them, the Streamliner G2622 stands on its own. The sound is vintage, but unique, and the quality is 100% ridiculous for the price you’ll pay for this instrument.

The tone and volume control vagaries deliver an impressive foundation that can help musicians explore plenty of frequencies while playing.

If you’re a beginner who wants a high-quality instrument at an affordable price, the Gretsch G2622 is the best one to try first. The one place where opinions tend to get divided is the finish to use, although the cherry option does seem to deliver the best tone. 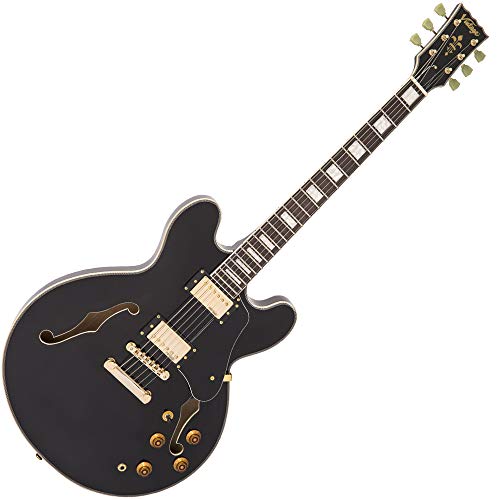 Vintage VSA500 Electric Guitar Get it on Amazon

If you looked at the Vintage VSA500 and a Gibson ES-335 side-by-side, you’d swear the same factory was responsible for the two guitars. Although it isn’t a 100% clone, you can enjoy lots of thunder and resonance from the maple body and mahogany neck.

The one area where some audiophiles have a problem with this guitar is the Graph Tech NuBone nut. It’s a synthetic component that is better than the cheap plastic options that dampen your tone on entry-level guitars, but the sound is quite as good as you might expect for an ES-335 copy.

The result is credible as a Chinese import, with blues-like tones and a solid build with enough offset to avoid running afoul of today’s copyrights.

Even if the tone you get isn’t 100% like the Gibson original, the sample is exceptional.

How the Vintage VSA500 Guitar Plays Next to the ES-335

If you’re looking for a true beginner’s instrument that still gives the small-V vintage tone, this guitar offers several benefits to consider. When you pair this instrument to an old Marshall or Fender amp from the 1960s, you’ll create some beautiful music!

When you want some extra speed or style with the riff, the VSA500 struggles to keep up with the ES-335 in a side-by-side comparison. The sustain of the Vintage guitar lacks some character at the end of the note, and the overall sound feels more processional and planned than dark and unpredictable like Gibson’s offering.

Reverend consistently makes excellent guitars that sell at affordable prices. Although their ES-335 copy is made with Korina instead of maple, the body doesn’t quite deliver the same visual vibe as Gibson’s iconic design.

It has a maple top with dual humbuckers that combine with the Korina to offer impressive high tones while providing a rich bass.

It doesn’t have an f-stop in the body, which is ultimately why other ES-335 copies are a little better. The sound is still excellent with the Many Ray HB, but it isn’t the pretty vintage semi-hollow sound you’d expect.

What you do receive with this investment is a guitar that promises more structural integrity and added sustain because of the resonance power offered by the Korina.

Thoughts on a Riff Guitar – ES335 Copy from Gibson

The Gibson ES-335 guitar is one of the best instruments ever built. Its consistency is beyond compare. Since the MSRP is nearly $3,000 for it, a copy of this iconic design from a different manufacturer can save money without compromising the tone you receive.

When I play the four copies of the Gibson ES-335 guitar, the one that stands out the most from me is the Gretsch.

Although it isn’t as close to the sound as Ibanez or Epiphone, what I love about the instrument is its versatility. I can play riffs on it from multiple genres without sounding out of place when paired with the rest of the band.

It’s a straightforward instrument that shows you what it can do right away. As you get to know the guitar better, you’ll find that the Broad’Tron humbuckers let you channel artists from BB King to Led Zeppelin. There’s a lot of potential given to plays at a price that, quite honestly, borders on insanity.

With that said, all four ES-335 copies deliver strengths in unique ways that require attention. Although I’d still take the original Gibson over all four of these options, you won’t feel disappointed with your investment when playing any of them.