The Les Paul guitar from Gibson is one of the most recognized instruments in the world. Gibson Guitar Corporation first sold it in 1952. It was designed by John Huis, who served as its factory manager.

Les Paul provided input on the design and eventually endorsed the idea. Along with the Telecaster and Stratocaster from Fender, the LP became one of the world’s first mass-produced electric solid-body guitars.

There have been numerous design updates, reissues, and vintage callbacks over the years, including the LP Classic.

With “1960” added to the design, there is some thought that Gibson is considering it a reissue, but that isn’t entirely accurate.

The Les Paul Classic is not a reissue guitar. Gibson created this mythos when they put 1960 on the pickguard during the design phase, but several discrepancies prove that it is an original. The neck profile was thinner, the binding eventually disappeared, and two-piece backs with yellow inlays were all part of the update.

The LP Classic has always been an above-average guitar. It’s an excellent option for anyone who wants to experiment with a Les Paul without the commitment of getting to a signature series or a custom piece.

If you put the new Classics up against the originals, you’ll find that the sound is a bit better. It also comes with an ABR-1 bridge instead of the Nashville option.

That makes it closer to a special model that brought back some of the best features from the 1960s without including the design’s vintage flaws.

Although some experts argue about the semantics from Gibson’s releases over the years about their LP Classic, there’s one truth we can all find. It’ll be challenging to put it down if you start playing one of these guitars!

What Are the Benefits of Playing an LP Classic?

When you pick up a Les Paul guitar, you’re getting an instrument that delivers a remarkably versatile tone. It gives you a cutaway if you like that sort of thing, along with a slightly larger neck than an instrument like the Stratocaster.

With the LP Classic 1960,  you’re getting a great setup to run dual humbuckers for something smooth and heavy. It’s a fantastic option for anyone playing jazz, blues, metal, or any form of rock. It doesn’t have the twang that you can get from Fender instruments.

The original LP guitars in the early 1950s came with dual P90 pickups. Although that design is a single-coil option, it delivers a more assertive tone with extra presence. Once humbuckers became the go-to standard, their inclusion became the standard setup for the Les Paul.

When you pick up an LP guitar, you’ll notice that it is relatively thick and weighted. Many Les Paul designs are notable for the weight they carry, which can be 14 pounds – or more!

That happens because the design was a single cutaway. More recently, the LPs have been given a hollowed-out chamber to take some of the weight away.

One of the reasons why the LP instruments were so heavy was a reliance on mahogany for the body with a maple top. Gibson continues to use this combination, although you can find some variants with other options.

Although the Classic has some differences when compared to the Standard, Special, Studio, and others, the main specs for the guitar remain the same.

The LP (of any series) is an iconic guitar that supports almost any musical genre. It comes with such an extensive list of professional guitarists that putting together the names that have played the instrument to enjoy its sound is massive.

Les Paul guitars have a legacy and a reputation that helps them continue to generate sales, but you don’t earn those tributes without producing an incredible instrument over many years.

If you’ve been thinking about adding a new guitar to your collection, an LP Classic 1960 is a fantastic choice! Truthfully, any Les Paul is a great investment – even if you grab one from a pawn shop or a second-hand seller.

Here are some reasons why the LP can help to achieve your goals.

Although an LP looks incredible, the resonant tone and exceptional sustain are what attract musicians to this instrument. You can get a nice growl from the humbuckers, hit a chorus pedal while backing off the gain for something clean, and tweak it in numerous other ways.

The Les Paul has a set neck, which means it’s put into a pocket in the guitar body. Some glue keeps it in place, allowing consistent contact between it and the instrument’s body. Combined with the bridge assembly, you’ll end up with a significant breakpoint that contributes to the overall experience.

Many of today’s guitarists grew up when shredding was the thing to do with a guitar. Many fretboards came built for speed, delivering a thin neck that often felt like it was going to crack if you tapped it too hard.

Once you get used to a thicker, heavier neck, you’ll find that it delivers more control over movement. The LP Classic is an excellent example of this attribute, providing the proper support levels for virtually any playing style.

A Les Paul guitar can do almost anything. With the Classic, you can cover plenty of tonal ground without feeling like you’re stepping outside of your comfort zone. With its pickup design, you can have a lot of distortion, some crunchy rock sounds, and much more.

You can even take the pickup covers off an LP guitar to give it a more complex sound without going through an extensive modification process.

Fender uses a 25.5-inch scale length for the Stratocaster and the Telecaster. When you pick up a Les Paul, you’ll play 24.75 inches instead. With less length, you’ll have access to warmer tones, which is the trademark of the LP design.

Several additional factors go into the eventual sound that you’ll get from Gibson’s classic design, but it certainly creates a suitable foundation for the feel and sound.

A Les Paul guitar can make you feel like you’ve just completed your first day of Crossfit training after sitting in front of a computer for three years without doing an exercise. It can also let you tap into the power of your creativity.

It’s a simple equation. More weight in the guitar means that you have more tonewoods contributing to the overall sound profile for the instrument.

You can find plenty of exotic and manufactured woods used to make guitars today, but nothing is better than mahogany. Its rich resonance delivers a note with extra character and charisma. The legendary sound from an LP starts with this foundation.

The average price for an LP Classic 1960 on reverb is about $2,000. That’s not a bad price, especially since this instrument can deliver a beautiful tone for years.

I’ve found that the ESP LTD EC-256FM is a viable alternative to the 1960. It has almost the same shape, although the LP has a rounded portion that ESP brings to a sharper point. 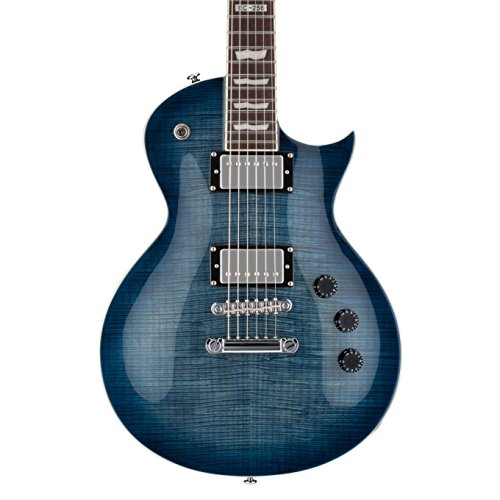 ESP LTD EC-256FM Electric Guitar Get it on Amazon

You’ll have fewer controls to manage with the ESP LTD guitar, but it still delivers a similar profile. It uses mahogany for the body and maple for the top, just like the Les Paul. The only significant difference is that this instrument uses jatoba to create the fingerboard.

Guitarists will feel at home with nearly any musical genre or style. Both pickups are passive with this design, but you still get plenty of diversity for experimentation. If you plan to play it daily, you’ll want to plan on replacing the tuners in a year or two.

The action on the ESP LTD is fantastic. You’ve got to be careful on the G since it’s a bit sensitive, but that’s nothing that a new set of strings can’t fix. The pickups in the neck are arguably the best part of the overall design, delivering nearly perfect intonation straight from the factory.

Whether you’re looking for a student guitar for a high-level learner or something that you can take to gigs without worrying about surface damage, the ESP LTD EC-256FM is an excellent alternative to the Les Paul.

A Final Thought on the LP Classic 1960 Reissue Myth

Good marketing won’t turn a lousy guitar into a great one. The only thing that happens is a misperception of what to expect when picking up the instrument. The LP Classic 1960 is so good that it delivers a vintage playing experience that makes it feel like a reissue when it stands on its own as an individual piece of musical craftsmanship.

My first experience with an LP guitar happened in band class back in high school. I was playing the trombone at the time, but our teacher wanted to play a piece that included an electric guitar.

No one in the band played the guitar – or at least admitted that they did. I raised my hand to volunteer for the part.

Getting to play a Les Paul for an hour each day was lots of fun. I grew so attached to the instrument that I offered to buy it from the school. During the senior award ceremony, they gave it to me instead. It holds a place of honor in my studio, reminding me that much of what goes into each note we play starts with love.

The LP Classic 1960 reissue is like falling in love at first sight. Trust your feelings – it’s a fantastic guitar!