Epiphone has created high-quality instruments at affordable prices for several years. Each idea they have seems to be a home run.

Whether you’re working a stage or something at the local dive, Epiphone guitars work with every possible genre. The respect given to the brand under the Gibson banner is the same that you’ll see with Squier and Fender.

The Epiphone catalog covers basses, amps, accessories, acoustic, and electric guitars. Some artists, including Bjorn Gelotte, have turned to it for their signature models.

If you want the best Epiphone guitar, you’ll need to choose a semi-hollow archtop. It’s either the ES-339 or the Dot 335.

Gibson created the legendary ES-335 in the 1950s at a time when Epiphone constructed the Sheraton and the Riveria. After coming into the brand’s umbrella, the Epiphone version became known as the Dot 335. The ES-339 is a bit smaller than its counterpart, although it still delivers a rich sound and resonant response.

The ES-339 is a direct descendent of the ES-335 in Gibson’s lineup. These original semi-hollow guitars are manufactured in the brand’s custom shop in Memphis.

The goal with the original ES-339 design was to create the benefits of the 335 while getting the guitar to be the same dimensions as the Les Paul.

A standard Gibson 339 is available with a 30/6 neck or a beefy ’59 profile. Both options are made with mahogany.

Epiphone makes three different versions of the ES-339: the ES-339 PRO, the ES-339 P90, and the Ultra-339. They’re considerably less expensive than their Gibson counterparts, but you’ll still get all the essential playing opportunities with this entry-level instrument.

When you see the Epiphone ES-339, it looks a lot like the Dot 335 from a distance. You almost need to put the two guitars side-by-side to see the body differences between these two instruments.

The ES-339 becomes noticeably smaller in that comparison. It uses a chambered body design and a center block to deliver the same output as the 335, but you tend to get a tighter resonance response with the overall setup.

The profile, feel, and neck scale length of the ES-339 is the same as the Dot 335. That makes it relatively simple to transfer between the two instruments if you have unique setups to play while at a gig or during a recording session.

Instead of using Alnico Classic Pros for the humbuckers, the ES-339 comes with a pair of PRO and PRO plus pickups in the neck and bridge, respectively. They use the Alnico V magnets to deliver a hotter output than the classics found on the 335. You also get independent volume controls for each pickup push and pull, tempering the production for a vintage sound without sacrificing modernism.

You can easily use an Epiphone tuning machine on the headstock while the LockTone bridge and stopbar do the work you’d expect with this guitar.

When you pick up the Epiphone Dot 335 for the first time, you’ll notice the lower bout immediately. Although it might seem like a daunting thing right away, Epiphone offers balance by adding a chambered design. That means the weight-bearing needs are minimized for most players.

The Dot 335 offers enhanced articulation and better attack because of the tonewoods, with a mahogany center block included. Each note and chord reaches its full potential with these attributes.

Epiphone joins a 24.75-inch scale length mahogany neck with hand-fitted precision and high-grade adhesive to keep the instrument comfortable. It uses the D-style profile with a slim taper to keep things precise in the hand. With a 12-inch radius, you’ll love bending the strings while playing.

That’s why the Dot 335 is an essential component of many blues bands and players.

You’ll find premium hardware added to this guitar, including Grover tuners. The instrument upholds its tuning integrity while offering precise options for multiple genres. You even get the exclusive LockTone Tune-o-Matic bridge with a stopbar to optimize sustain and intonation.

Review of the Epiphone ES-339

It didn’t take long for the Gibson ES-335 to make a positive impression on the marketplace. Its tone and versatility in 1958 quickly led to changes in jazz, blues, and rock.

You can make the ES-339 sound vintage, nasty, or rude. It all depends on the outcome you need for your music.

One of the reasons why the Epiphone ES-339 is cheaper is that the instrument is made in China. The PRO features the classic lines from the original 335, coming in around 75% of the size. You’ll get the typical laminated maple body and top, which is the same as almost any other guitar in this universe.

I love the SlimTaper D-style profile for the rosewood fingerboard. It comes with 22 frets and 14:1 vintage-style tuners. You’ll get tone and volume controls, with the option to split for single-coil tones with the push-pull design.

I think my favorite design is the sunburst, although you can get it with black, cherry, natural, and ebony.

When you tackle rhythms with the ES-339, you’ll get a solid sound that doesn’t have the out-of-phase pitchiness that Fender provides. It’s not quite like a Gibson either. When you add some chorus to it, you’ll get sounds similar to what 311 played back in the 1990s.

I love adding some crunch to the sound. It gives the guitar a bluesy tone that works perfectly for most rock settings.

The neck is more substantial than the original 335 necks, so it might not work for every musician. Plugging it into a 1×12 combo helps the guitar cover plenty of territory. It starts clean, helps create some acoustic sounds, and experiment to see what kind of tones you can develop.

It’s an excellent axe that delivers plenty of value for the money. 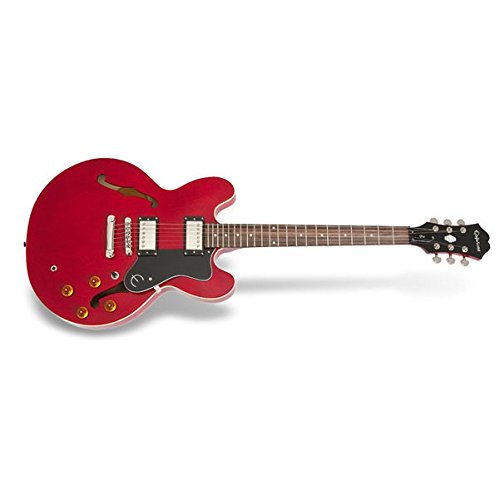 Review of the Epiphone Dot 335

If you don’t mind spending a touch more on a guitar, you’ll appreciate what the Epiphone Dot 335 brings to the conversation. It’s a non-nonsense semi that delivers a bit of expertise and background. You’ll find its versatility is its best attribute, with usable tones across an entire spectrum to enjoy.

Once you pull the instrument from its box, you’ll notice its weight immediately. It’s probably more accurate to call it a semi-solid. The original Gibson used a solid mahogany piece for the center section, a touch wider than the surrounds and pickups, to reduce feedback and improve sustain.

That feature continues to be part of the Epiphone Dot 335 lineup.

The one thing I’m not a fan of with the 335 is the plastic edge binding. It looks authentic, but it’s not quite the same as the original. A deeper inspection will show you other compromises made in the construction to create something that fits an entry-level budget.

You can select from a cherry sunburst, ebony, natural, vintage sunburst, or a straight cherry color.

The joint feels solid when playing, along with the scarfed one under the first frets to secure the headstock.

It gets its name from the inlays on the rosewood fingerboard. Between each fret lies one that adds some visual charm to the playing experience.

Until the Epiphones came along, you had to roll with the Supernova, Sheraton, or Casino to get a block inlay design for your guitar. Although it’s more about taste, I love the overall simplicity of the ES-339’s design.

Perhaps the biggest knock on the Dot 335 is the chrome-plated hardware. It doesn’t age the same way as nickel, but you’ve still got to consider the cost. That’s a small price to pay, considering the overall affordability of this instrument.

If you’re looking to step outside of Epiphone’s world for an entry-level guitar, you’ll find plenty of cheap Chinese-made instruments to consider. Most of the generic brands all play the same way, especially in the under $200 category.

When you want a decent entry-level guitar, you’ll need to spend at least $250. Even then, you won’t get the exact tone or capability as a Fender, Gibson, Squier, or Epiphone.

I’m a big fan of the Ibanez GRX if you want something other than the Epiphone ES-339 or Dot 335. It uses quilted maple for the top, offers a T106 trem bridge, and the high-output Infinity pickups need to be heard to be believed.

The back is a combination of poplar and maple for a crisp sound with a surprising attack. It uses New Zealand pine for the fingerboard, providing enough speed and versatility to make it feel close to rosewood. You’ll get white dot inlays reminiscent of the 335, although the Epiphone design is slightly superior.

Left-handed options are available with the Ibanez guitar. You’ll find the action is smooth like butter, with suitable balance, and it sits in position naturally. The tuning doesn’t hold as much as I’d like, but you can step things down for an improvement (like a Drop D) and avoid fret buzz.

I use my Ibanez GRX for power chords in the studio. It sometimes travels with me for the occasional gig. For the price and its construction, you’ll find that this instrument is suitable for most playing requirements.

The best guitar to choose between the Epiphone ES-339 and the Dot 335 relies on the body size preferences of the musician. Smaller individuals or those who want hotter pickups lean toward the ES-339’s vintage tone, while the Dot 335 offers Grover tuners and a stripped-back style.

I’ve always been a big fan of the Epiphone ES-339. Although many of the differences between it and the Dot 335 are minimal, I’ve found the more petite body to work better for my playing style.

I also love the vintage sound that comes from the instrument. It reminds me of the Golden Era of electric guitars in the 1950s, and that perspective makes it easier to form emotional connections with my music.

The differences between the ES-339 and Dot 335 aren’t many, but they’re important enough to consider a complete review of both guitars before choosing one.

Gibson’s ES-335 has been the guitar of choice for musicians across multiple decades. With the same style added to the Dot 335, it’s hard to go wrong with either option.